Ganesha Games' had another kickstarter earlier this year for their Mutants and Death Ray Guns game (MDRG for short).  This supplement was for Psi-Paladins and Techno-Barbarians (https://www.kickstarter.com/projects/9742092/psi-paladins-and-techno-barbarians-28mm-miniatures).

Its a relatively short supplement that introduces psychic mystics (ex: Jedi) and three heroes of the wastelands (ex: Thundarr the Barbarian).  I pledged for the highest tier so that I could get the miniatures, the game mat, and the paperback copies of MDRG and its first supplement Project Simian Ultra X.

First up were the paperback books.  MDRG is about 92 pages while Project Simian Ultra X (PSUX) is about 87 pages.  Fans of Song of Blades and Heroes will understand the rules easily, but the pages crammed with traits specifically for MDRG add a whole new layer to the game.  All the faction choices are unique, makes me wonder where its even possible to get miniatures to represent some of them. 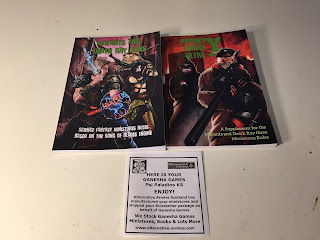 The following 10 miniatures were part of my kickstarter pledge.  I did not add Lord Phalag and his minions, although those miniatures looked very characterful.  But I got the 4 Psi-Paladins, the 3 Techno-Barbarians, and 3 Combots.   They all came with clear bases, but I chose not to use them. 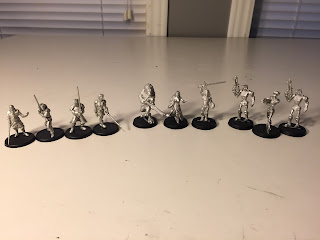 And here is the wasteland game mat, roughly 3' x 3'.  It appears to be an irradiated crater-filled deadzone.  Which is perfect for MDRG or for other sci-fi games. 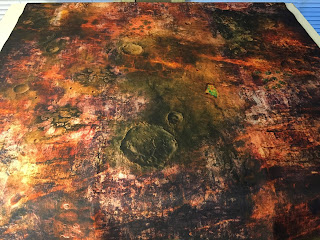 Thundarr the Barbarian, Princess Ariel, and Ookla the Mok.  Well almost.  Its Dashar with his Photovoltaic Sword, Lady Azura the Blue Sorceress, and Ferragg the Lion of the Wasteland! 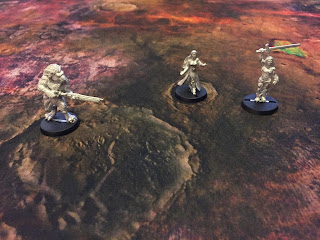 Well hopefully I can get them painted up soon and onto the tabletop.  I have yet to play MDRG, but as a veteran of other Ganesha Games I doubt there is much extra to learn other than new traits.  I'm also contemplating converting Warhammer 40k units over to it as well.
Posted by Jeff at 10:28 AM