I have continued to paint up the plethora of miniatures acquired from the Dungeon Saga Kickstarter.  These all came from the various add-ons I purchased on top of the core game.

Of Gods and Mortals....use with Song of Blades and Heroes perhaps?

I have been wanting to get a copy of Osprey's Of Gods and Mortals for a while now.  Its always been on the back of my mind with other projects at the forefront.  But I have finally caved in and ordered a copy and it showed up on my doorstep today. 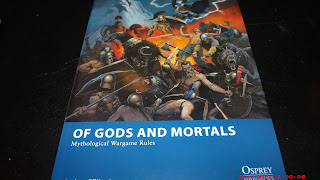 I have skimmed through it and like what I see.  Although I had not really wanted to recreate battles between Greek or Egyptian Gods, I definitely see the opportunity to use some of the rules for Fightin' Fungi/Advanced Song of Blades and Heroes.

For example; the Swamp Fungus could be a God for the Rotten Hearts faction along with an Enoki Cleric and the Reaper as Legends.  Or go generic fantasy and have my large Forest Giant as a God and a Dryad or Centaur for Legends as Elves and Animals represent Mortals.

Lots of potential using Of Gods and Mortals, thanks Andrea Sfiligoi for writing more great rules!
Posted by Jeff at 3:16 PM No comments:

Email ThisBlogThis!Share to TwitterShare to FacebookShare to Pinterest
Labels: Of Gods and Mortals, Osprey, Skirmish, Song of Blades and Heroes

I have slowly been working on the mound of miniatures I have accumulated over the past year.  I've reached a small milestone of sorts.  I have completed the base colors of all the Orcs and Goblins that I got with the Dungeon Saga kickstarter.  There is still more stuff needed to be done, basing and washes etc., but at least now I feel confident taking pictures of them while playing games.  They are officially ready for tabletop usage.


Now I wonder which group of miniatures I should focus on next.  Dwarves?  Abyssal Dwarves with their Obsidian Golems and Harpies?  Elves?  Undead?  Valandor Expansion?  Or perhaps back to Reaper Bones minis?  Or the newly acquired Alkemy stuff?  Or the load of Arcane Legions?  So many choices....
Posted by Jeff at 6:04 PM No comments:

Six Space Marines, armed with the best weaponry known to the Imperium of Man and bolstered by the faith of the Emperor, infiltrate a drifting space hulk.  They would soon encounter an infestation of genestealers, that xenos threat facing all of mankind.


Thoughts:  This was my third attempt at playing this game.  My first two attempts had been overwhelmingly disastrous.  After reading opinions and strategies on Boardgamegeek, I took another crack at it.  This time I took a more careful approach in deciding actions for the Space Marines.  There is a lot of synergy between the various combat teams, which takes more than just picking Attack each turn.

I'm enjoying it more each time I play.  The level of tactical foresight needed to play is extremely thought-provoking.  And....I can play solo!  And with the different locations, combat team options, events, this game won't grow stale anytime soon.
Posted by Jeff at 1:37 PM 2 comments: