I decided to try a bigger game of Orion's Gate (Orion's Gate), with Capitol Ships on both sides.  The match is between the Void Orcs and the Star League.
The Star League's Capitol Ship is outfitted with 2 Cannons (forward arc), Hangar, Torpedo (forward arc), and Giga Cannons (one left arc and one right arc).  Their Battleship has a Missile Cluster, Hangar, and Torpedo.  Both Cruisers are armed with Plasma Cannons.

I got to try out the component Warp Drive, which I thought was pretty neat.  I imagine seeing a Capitol Ship just pop out of nowhere and throwing out lots of close-ranged firepower would be terrifying.  The Viral Ram is guaranteed to damage a target.

I need to house-rule some boarding party rules (boarding torpedoes, teleportation, etc.) and racial benefits.  Might design some Eldar or Necron type ships as well.
Posted by Jeff at 5:20 PM No comments:

I got a game in of One Page Rules' Fantasy Skirmish, found here:  One Page Fantasy Skirmish
The armies were 300 points each, with my new GW Seraphon/Lizardmen and some proxy Mantic Games' Orcs & Goblins.  The mission was a standard 4 rounds battle to the death.

I was a bit surprised at the outcome.  I was looking at all the potential attacks available to the Orcs & Goblins compared to the Lizardmen and I thought the match would have gone differently.  The Quality difference between armies was a major factor, as well as unit choices and die rolling of course.  One time I had three Orc Boyz with Medium Swords assaulting one Saurus Warrior, they got 2 attacks each plus 1 for assaulting plus 1 for Furious for a total of 12 attacks, but at Quality 5+ I got only 3 hits in.  The Saurus Warrior rolled to block at 3+ and defended all 3 hits.

Still the game is easy to pick up and quick to play.  It would be nice if they had some unit creation rules, so I wouldn't have to proxy models for existing Warhammer Fantasy units.  But that's only a minor quibble.
Posted by Jeff at 2:03 PM No comments:

For those of you who may be interested, Ganesha Games has just released a new adventure for their solitaire pen-and-paper dungeon-delving game:  4 Against Darkness (http://www.ganeshagames.net/index.php?cPath=1_55&osCsid=iimt1n0va4tp4vr434qii5c0m1)

The title of the adventure is Dark Waters (http://www.ganeshagames.net/product_info.php?cPath=1_55&products_id=300)  Its divided up into two parts; the first is a planned dungeon (with a couple different paths to enter and NPCs you encounter to gain you entrance) and the second part is the typical random dungeon creation (but with a BUNCH of new aquatic minions, bosses, traps, treasures, etc.).  Of course its left open as an invitation to play your own random dungeons but using just the aquatic tables, so you'll have a reason to crack open this adventure again.  As an added bonus, there is a new playable class, the Swashbuckler.

Hopefully you will be interested in trying the adventure out, please give opinions and constructive criticisms.  If this turns out to be something enjoyable, I might write up a new one.  Yep, I wrote it.  My first published adventure anywhere on any format, please be gentle.  Thanks!
Posted by Jeff at 1:30 PM No comments:

Since I now have Warhammer lizardmen, and the starter box conveniently included the rules for those units to be used in Age of Sigmar, and the main rules are free online, I said lets give it a whirl.

I gathered all those Seraphon (lizardmen), all of which have some paint on them (better than none), and decided to try a solo match.  The only other miniatures I have that could remotely come close to the amount needed to challenge the lizardmen were undead.  So looking through the Vampire Counts list, I used my undead to proxy.

Off to the table we went.


I stopped the match at this point.  The match was taking longer than I expected but I could see the outcome.  The crypt horrors were nasty, dealing loads of damage and even healing themselves each round.  The mortis engine had loads of attacks and lots of health.  The Carnosaur wasn't a slouch either, but he was being wounded faster than he could kill the undead.  The Saurus Cavalry were doing alright, but with all those zombies it was only a matter of time.

The rules are fairly straight forward, nothing too difficult about how to play.  My concerns occurred when trying to remember all the different unit special abilities, and which spell or command ability is affecting who.  Playing solo is probably the main reason I had these issues and with so many models to start with, especially for my first time playing.  I'm sure if I was playing a live opponent and I only had one army to keep track of then things might have been smoother and quicker.

Overall, the game is decent.  Its easy and free, so no reason to at least read over it.  Not sure how often I'll try it out as I am limited on miniatures and it gets annoying to proxy models for specific type units.
Posted by Jeff at 12:38 PM No comments:

The wife and I went out of town today on a brief excursion up state; Columbia, SC.  She wanted to go check something out and I didn't have anything else planned.  Unfortunately what she wanted to see turned out to be a big disappointment.  So she asked if I wanted to see anything else since we drove up all that way (2 hour trip one way).  I pulled out the handy smart phone, typed in game stores, and lo and behold, a Games Workshop was right down the street.  I have not been in a Games Workshop store since 1998, nor have I bought any Games Workshop miniatures in years.  A hop, skip, and a jump away we went.

The store wasn't very big, but they had all the latest and greatest in GW products.  As well, the manager/owner of the store was the friendliest, most knowledgeable, and enthusiastic fan of the hobby I've met yet.  You could tell he was passionate about the hobby as well as the products he was selling.  You'll say that's his job, like a used car salesman he wants to sell his products and as many as he can.  But I say, he was just being very helpful and wanted to encourage more people to enjoy the hobby, whether that is collecting and painting miniatures or in playing the game.

Anyways, I was immediately drawn to GW's new starter sets.  They were for fantasy (Age of Sigmar) and 40k, and each was $85.  They generally each contained a heavy unit, maybe a hero unit, some specialist types, and some troops.  In most cases the price of the individual heavy or hero unit by itself is the same cost as the starter set.  I was drawn to one particular box, mostly for the heavy unit.  As you can guess, that box would be mine.... 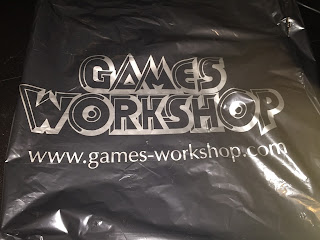 Once I made it home, operation assembly began.  A few hours later, and now approaching 1 am, I have completed my mission.


There were quite a few spare bits remaining on the sprues.  And I LOVE doing conversions and making stuff up.  As I tend to play games that allow a more free-form approach to character customization (like Song of Blades & Heroes), I have no problem just slapping bits together to make something out of nothing essentially.