I decided to play a little tabletop skirmish game today, this time using something different from One Page Rules called WarStuff.  You can find it here:  https://onepagerules.wordpress.com/portfolio/warstuff/ 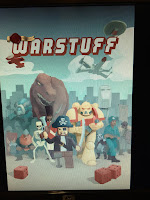 It allows some customization for whatever miniatures you want to use, very similar to Song of Blades & Heroes.  And like SoBH and other One Page Rules, each of your units has a Quality value for attacking/defending and some Special Rules.  The combat is slightly different, however, requiring you to compare your Quality to the defender's Quality to figure out what you need to roll on a die to hit the target.  Then you roll to see if you kill the defender or wound them.

Sounded simple enough, so I grabbed a handful of miniatures and plopped them onto the battlefield and started rolling dice.

Well the first battle went very quick.  It flowed quite well once I started getting into it.  I realized my Quality 2 spearmen are practically useless against Quality 3 creatures that are also Large.  But the spearmen succeeded, thanks to the buff captain and their superior numbers.  Considering how quick that match went, I opted to try another match.  This time something more straight forward.


WarStuff is a neat game.  I like being able to customize units to use any miniature I want.  And the rules are very light and matches go by quick, even with solo play.  I would recommend reading the Designer's Notes section of the core rules and heed the advice there.  I'll probably make some rosters in the future with more equal unit costs, just to see how the game might unfold.  Check it out, and let them know what you think over on their forum:  http://onepagerules.proboards.com/
Posted by Jeff at 3:10 PM