I wanted to playtest a few of the new traits found in the Fightin' Fungi rules.  As well as try out these Wrath of Kings minis I got.  I know my painting sucks, and the terrain is VERY primitive.  At least give me credit for trying.  Please?  Oh well. 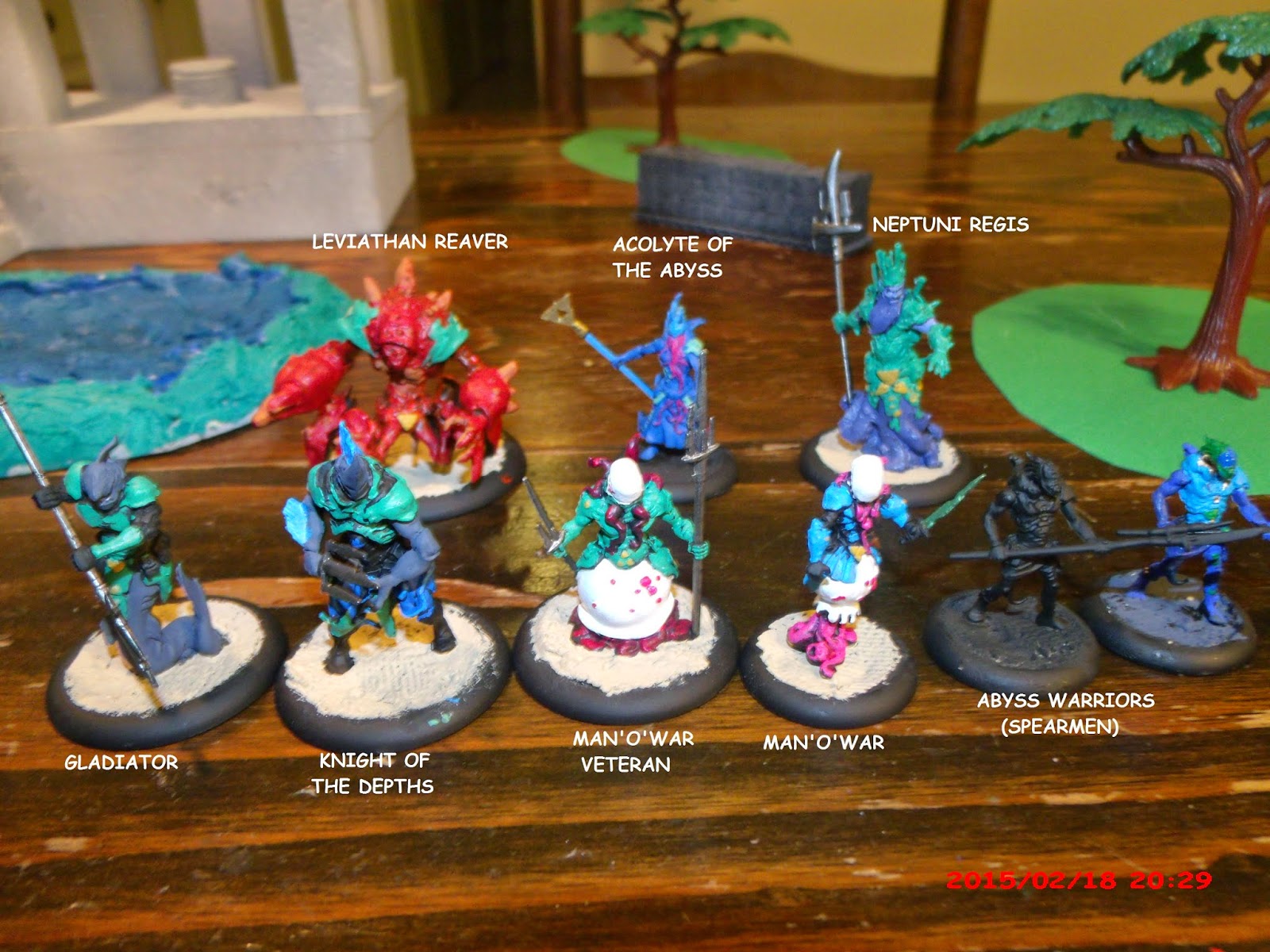 These are the Tide Hunters, Dwellers of the Deep Abyss, Riders of the Seas, and they smell (and taste) like fish.  Yummy! 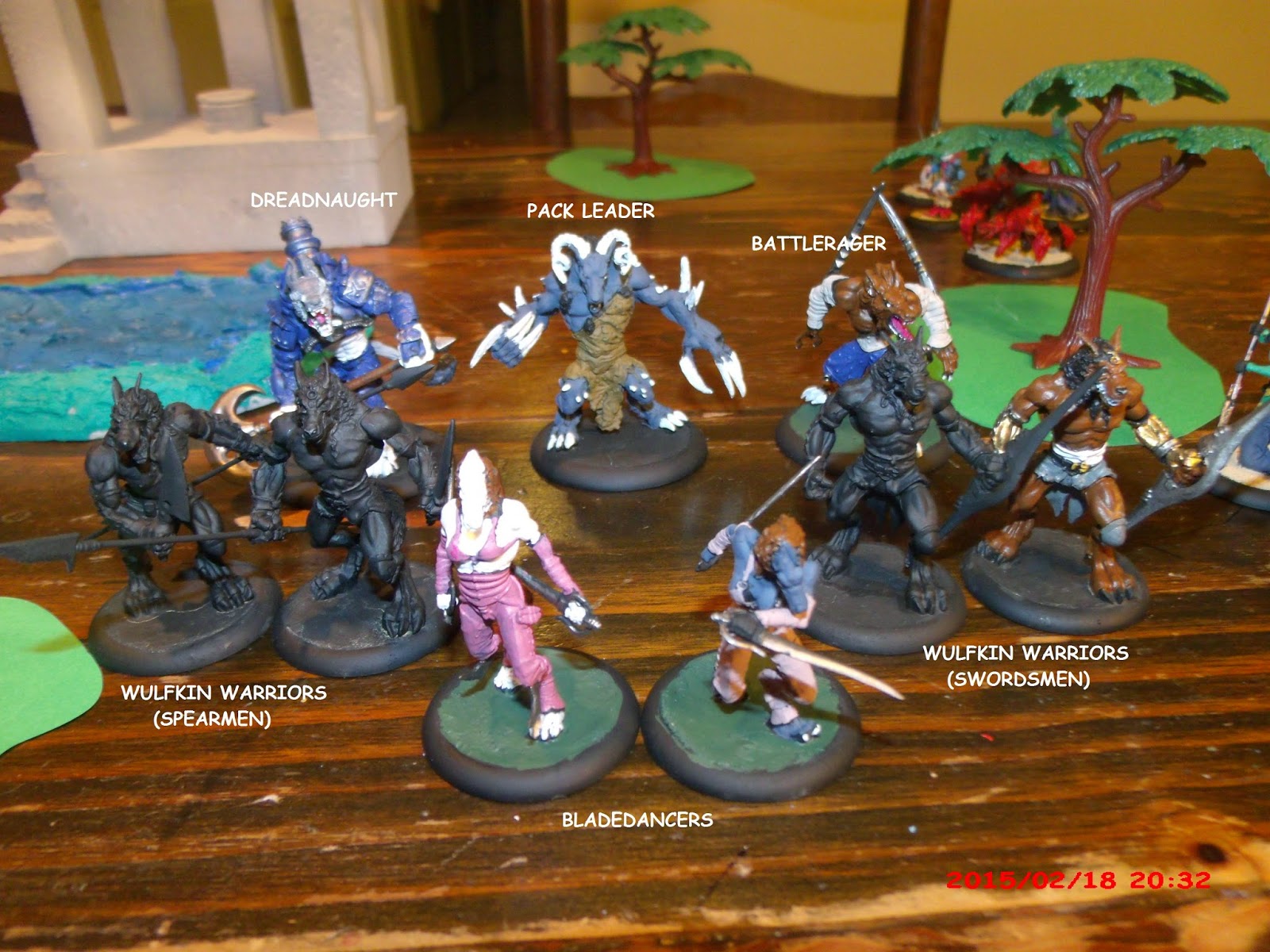 These are the Wulfkin, wolf-men that rule the forests, howl at the moon, and curse the flea demons! 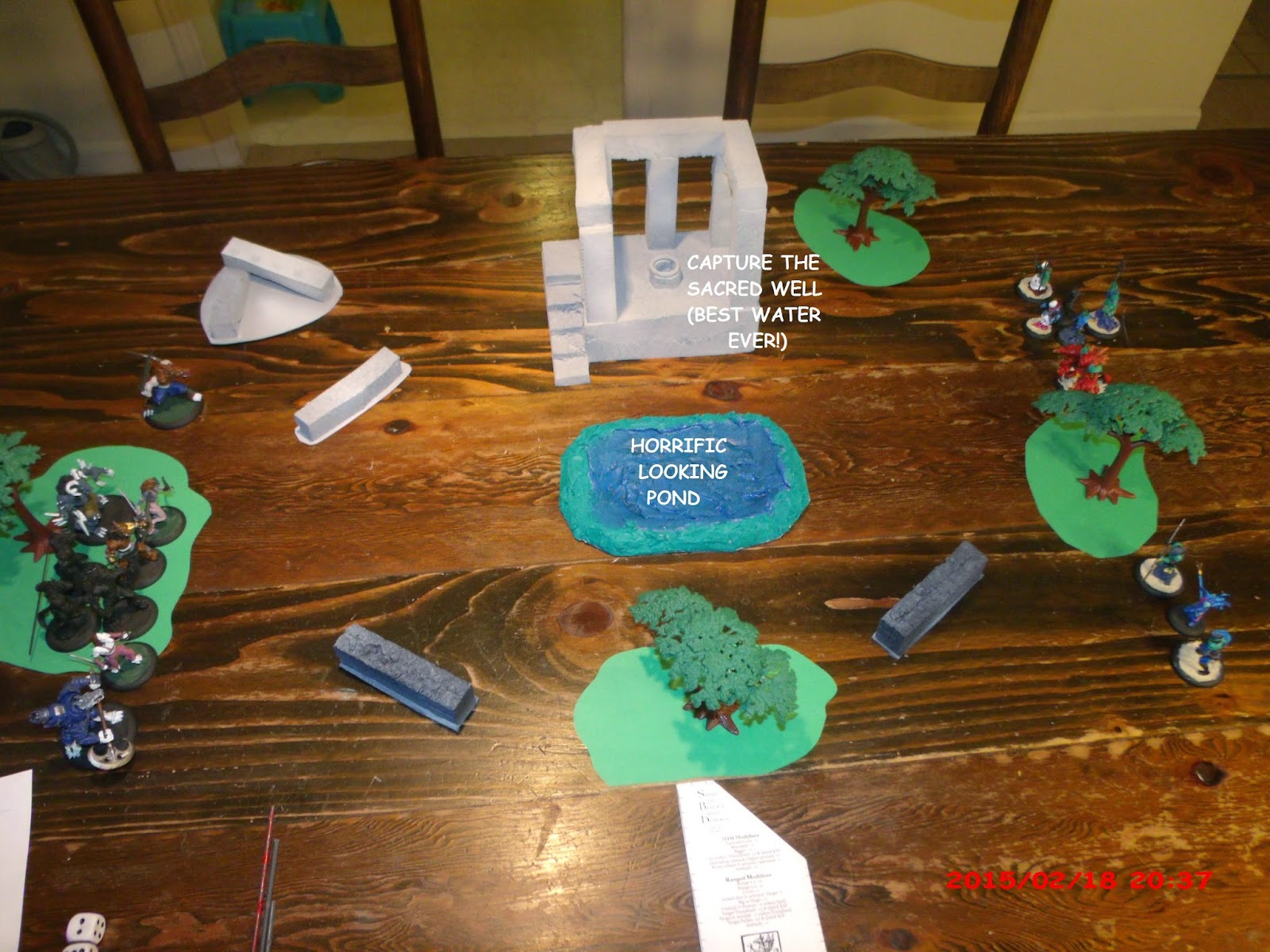 The two warbands meet on the field of dark wood-stained kitchen table.  The mission: capture the sacred well at the temple.  This sacred well is filled with sanitary potable water, a worthy prize for the thirsty.  Don't drink out of the pond in front of the temple, its made of styrofoam and wood filler. 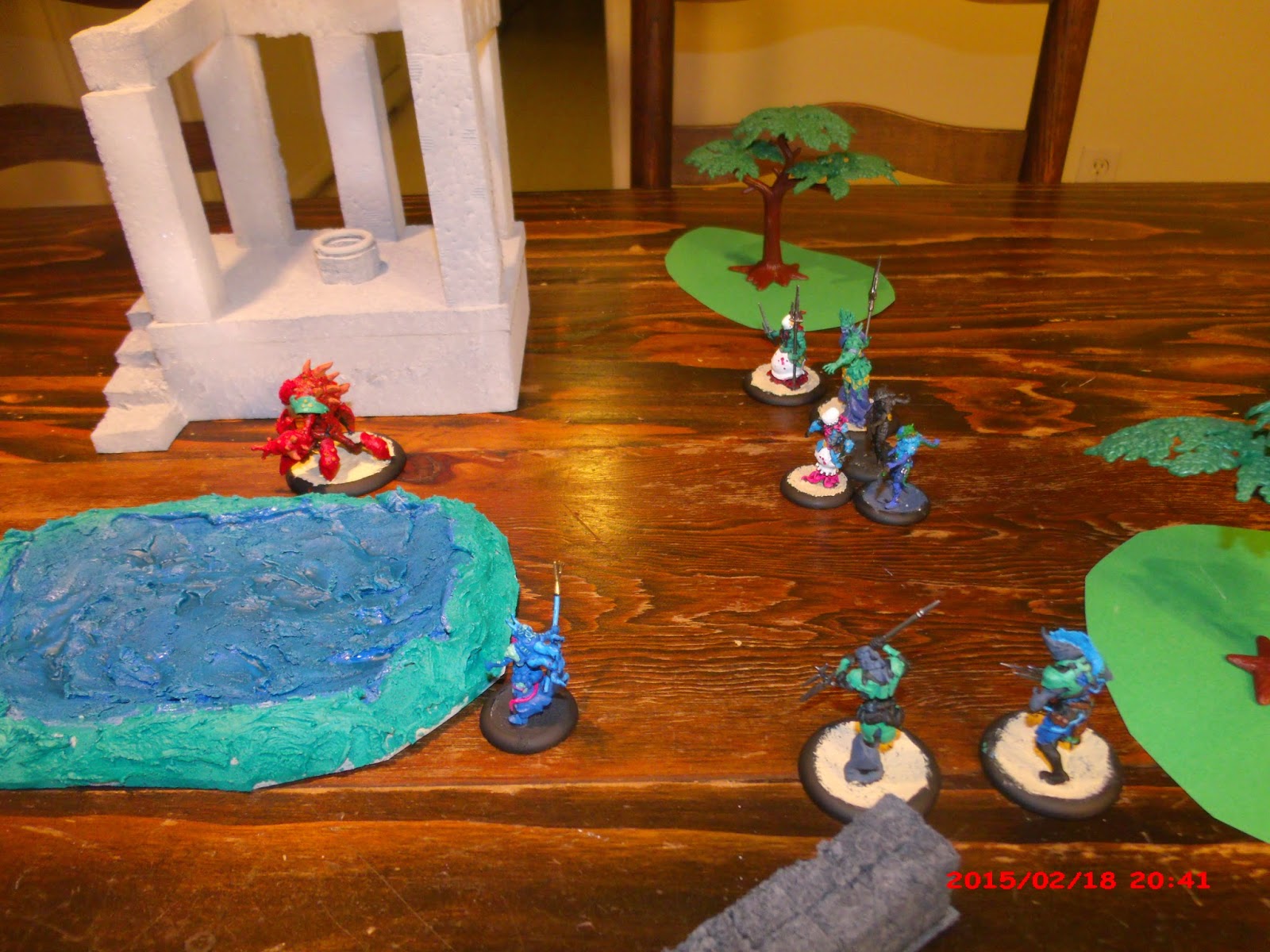 The Tide Hunters advance to the temple.  The Leviathan leads the charge, confident in his huge heavily armored body. 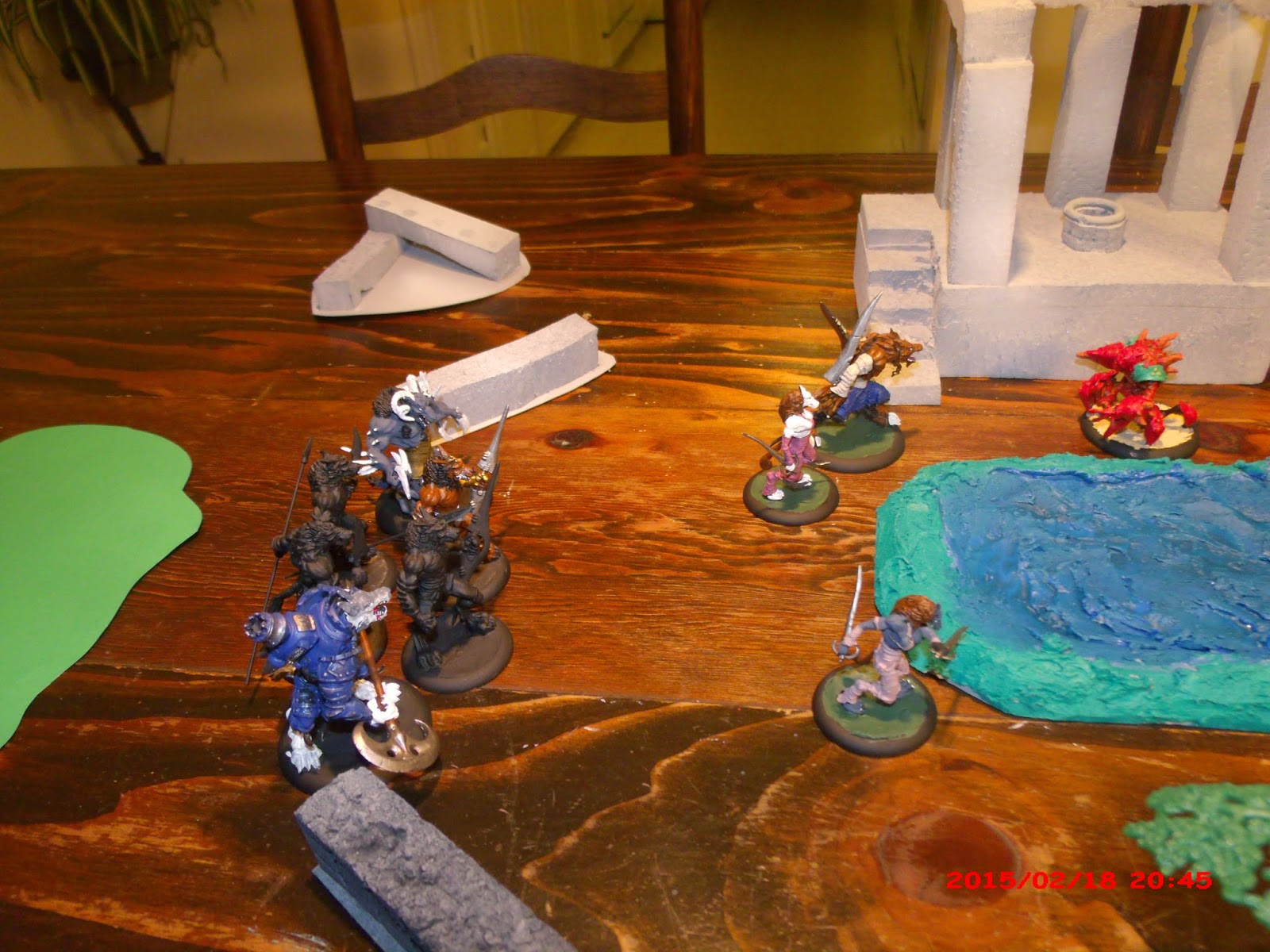 Not frightened, the Wulfkin are able to launch the Bladedancers and Battlerager swiftly forward as the rest moves up forming a solid front. 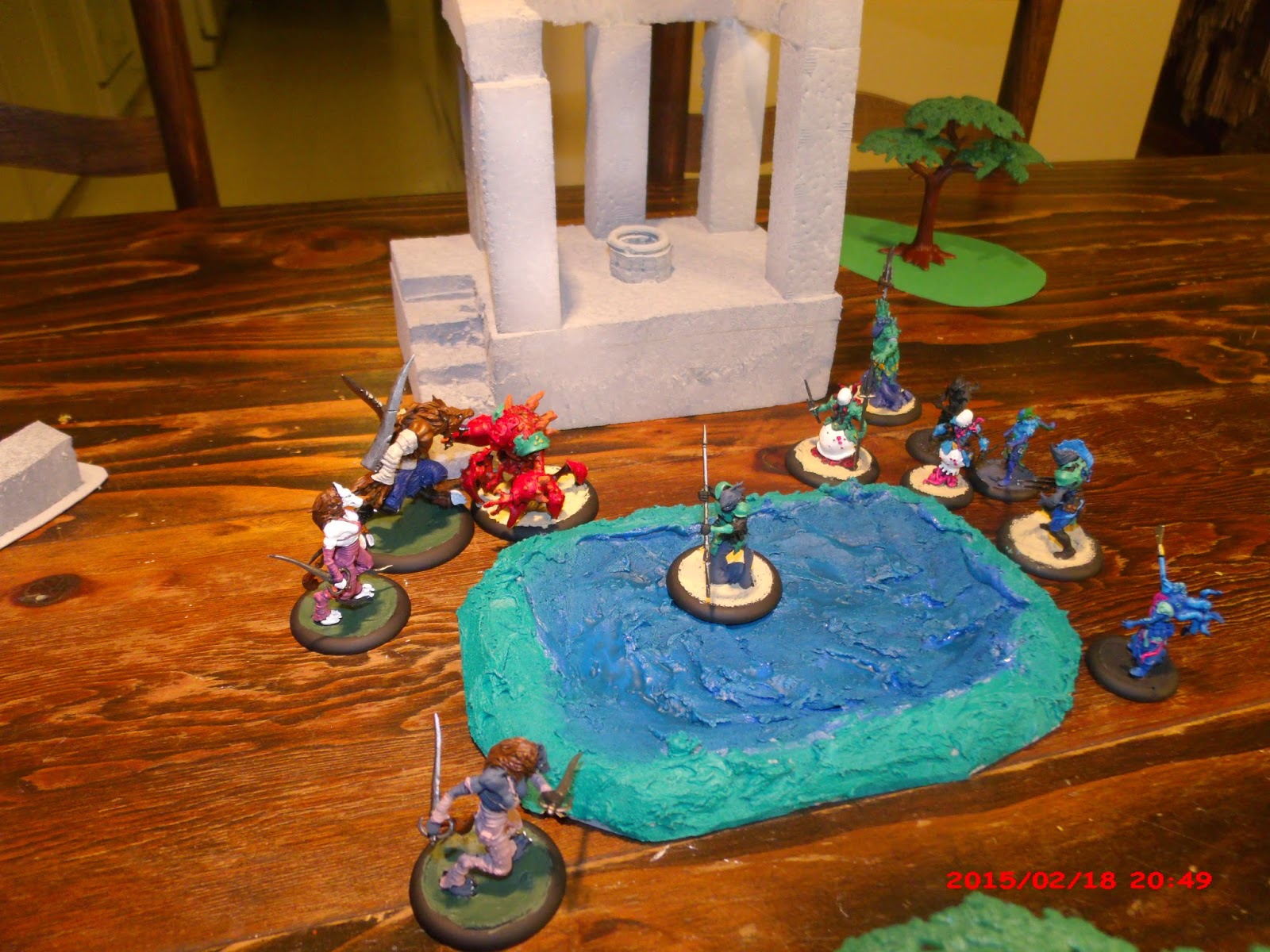 A charge is given by the Leviathan. 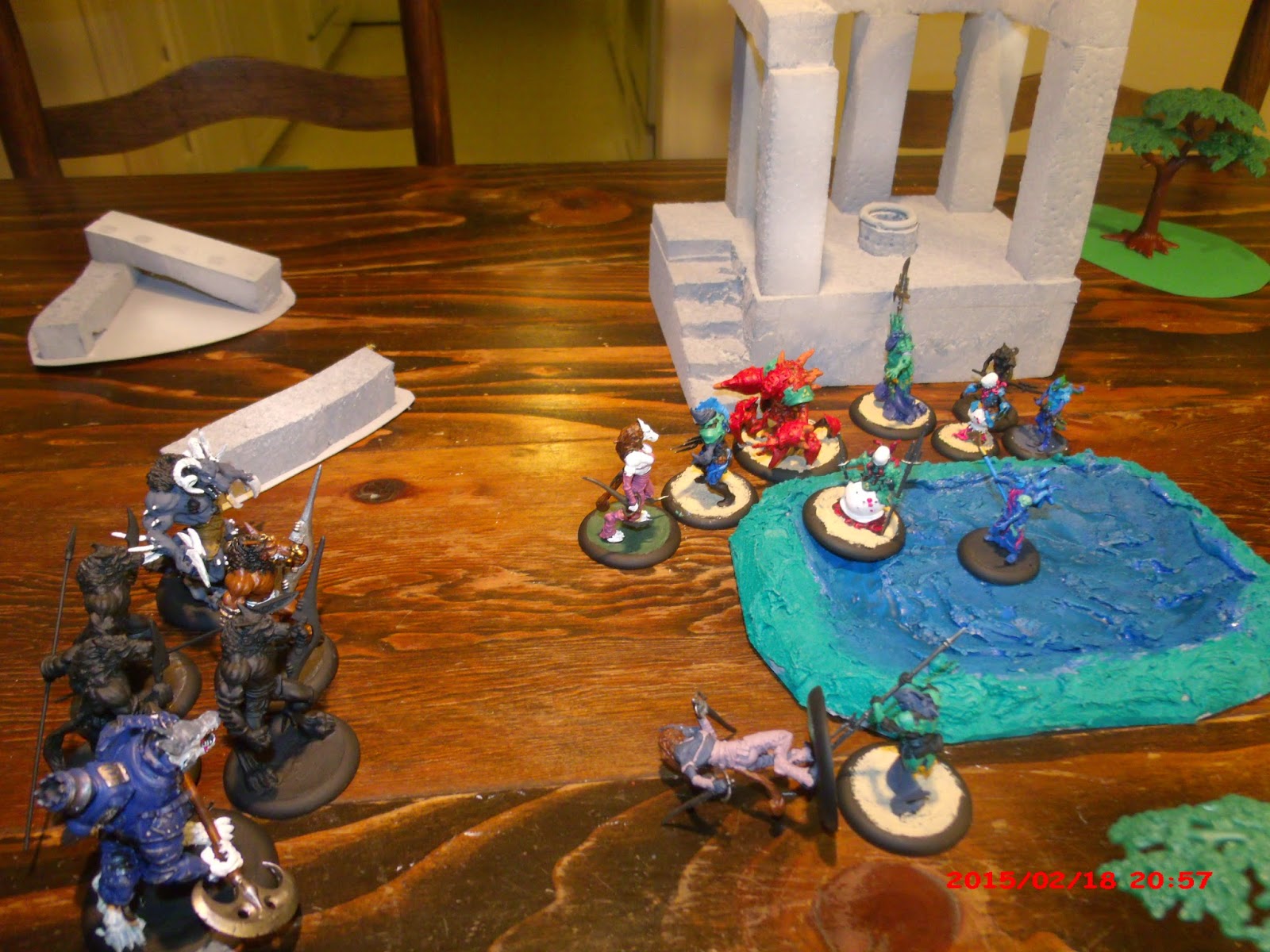 The Wulfkin roll an untimely turn-over and the Tide Hunters capitalize on it.  The Battlerager is slain and a Bladedancer is knocked down. 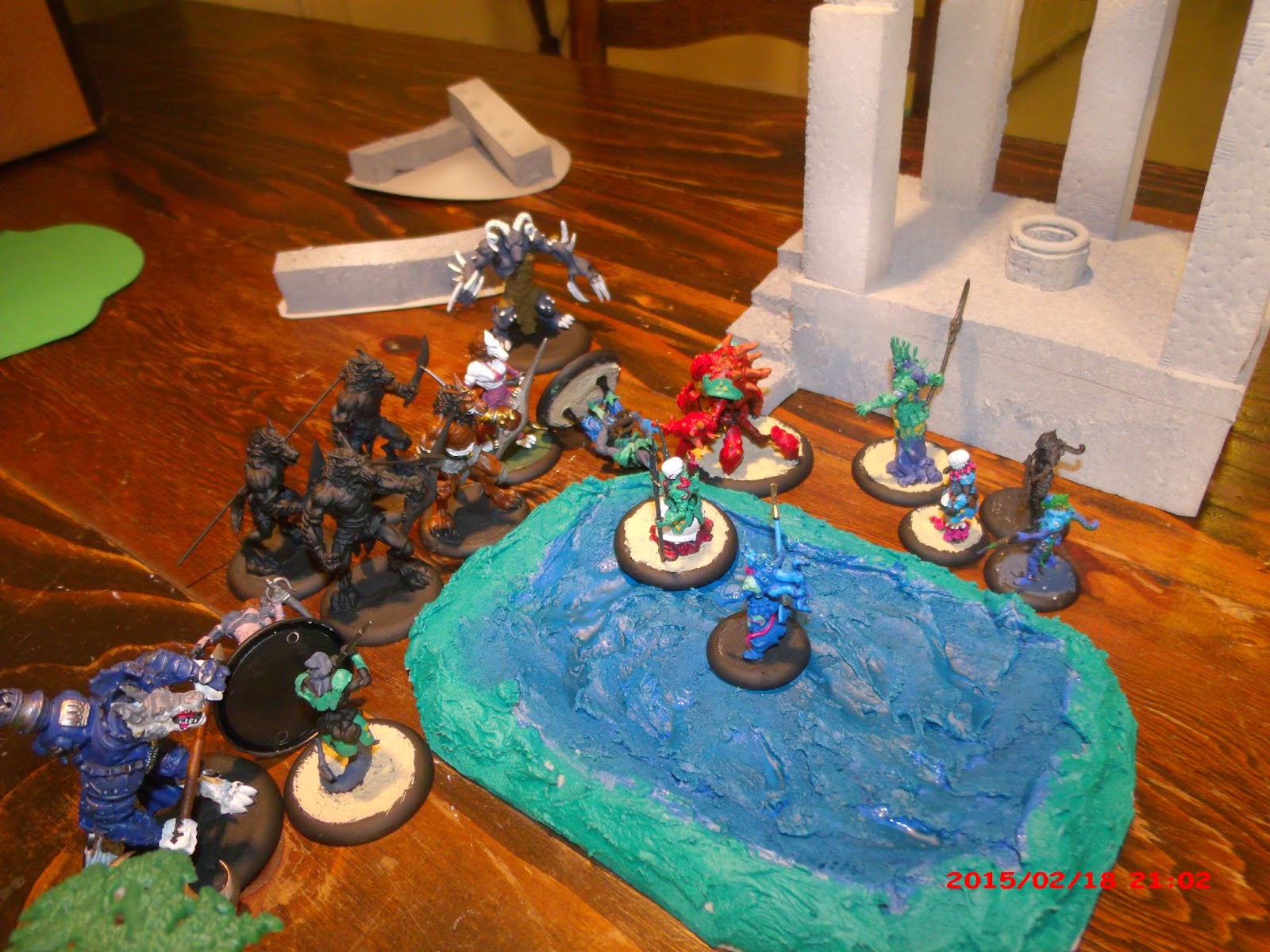 Then in a surprising turn of events the Wulfkin are all able to activate and press forward collectively. 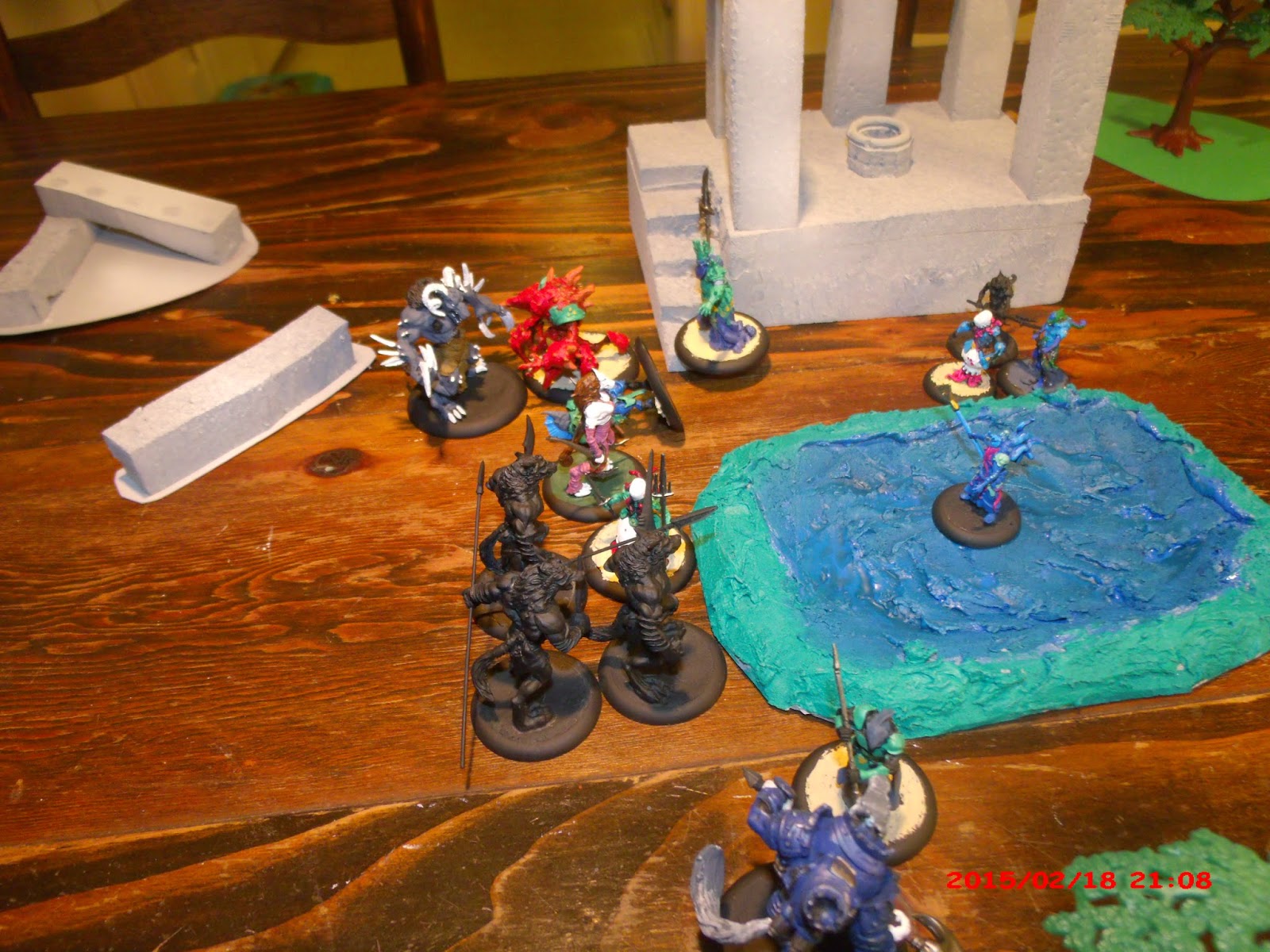 The Acolyte of the Abyss launches a stunning bolt of lightning from the safety of the murky pond at the group of Wulfkin Warriors.  One is knocked down and the Man'o'War Veteran moves in and then.... 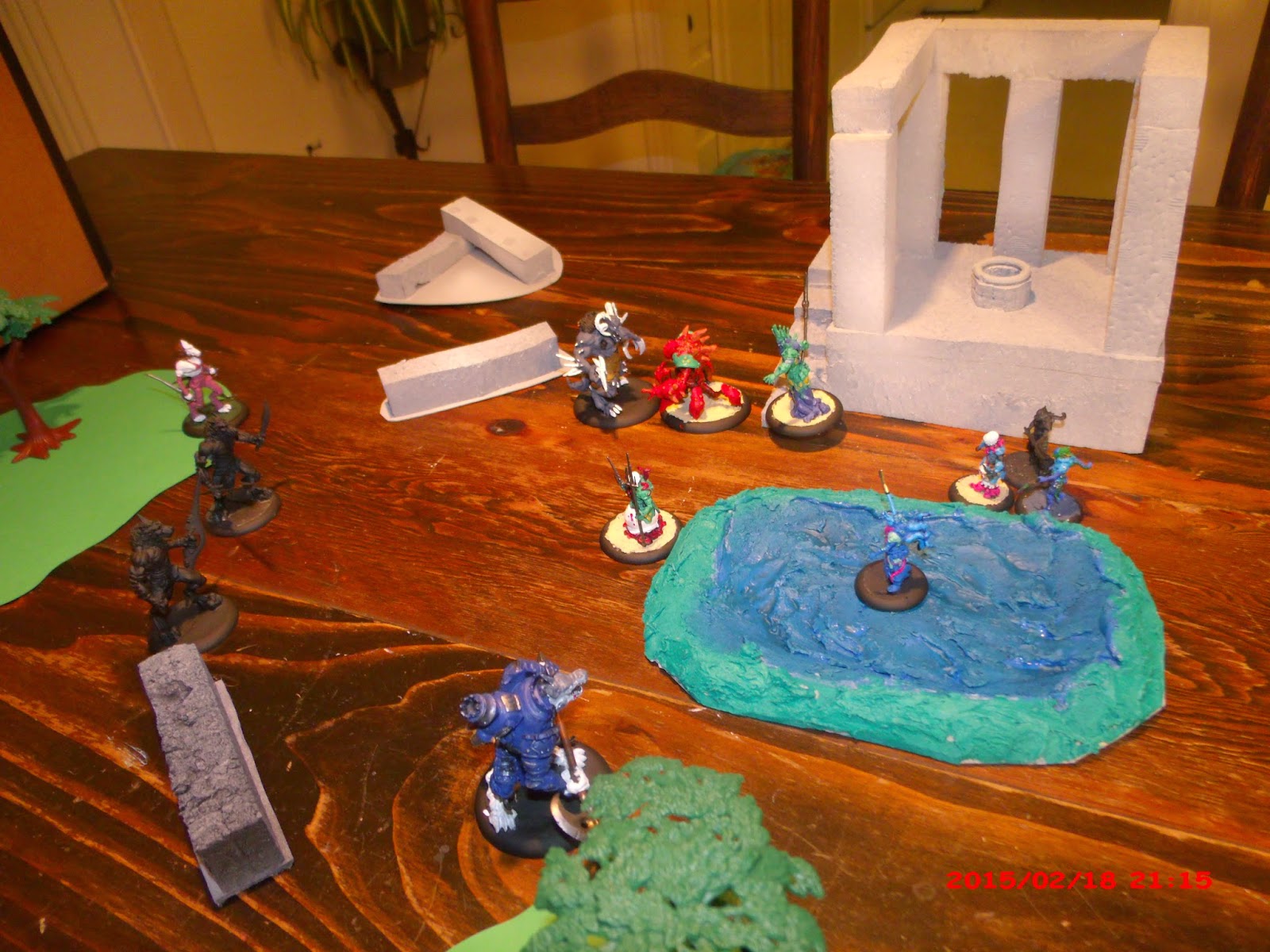 ...a Gruesome Kill of a Wulfkin Warrior!  Most of them fail morale and flee.  The Wulfkin Dreadnaught, with an amazing Power Attack with his Heavy Weapon, obliterates the Tide Hunter Gladiator. 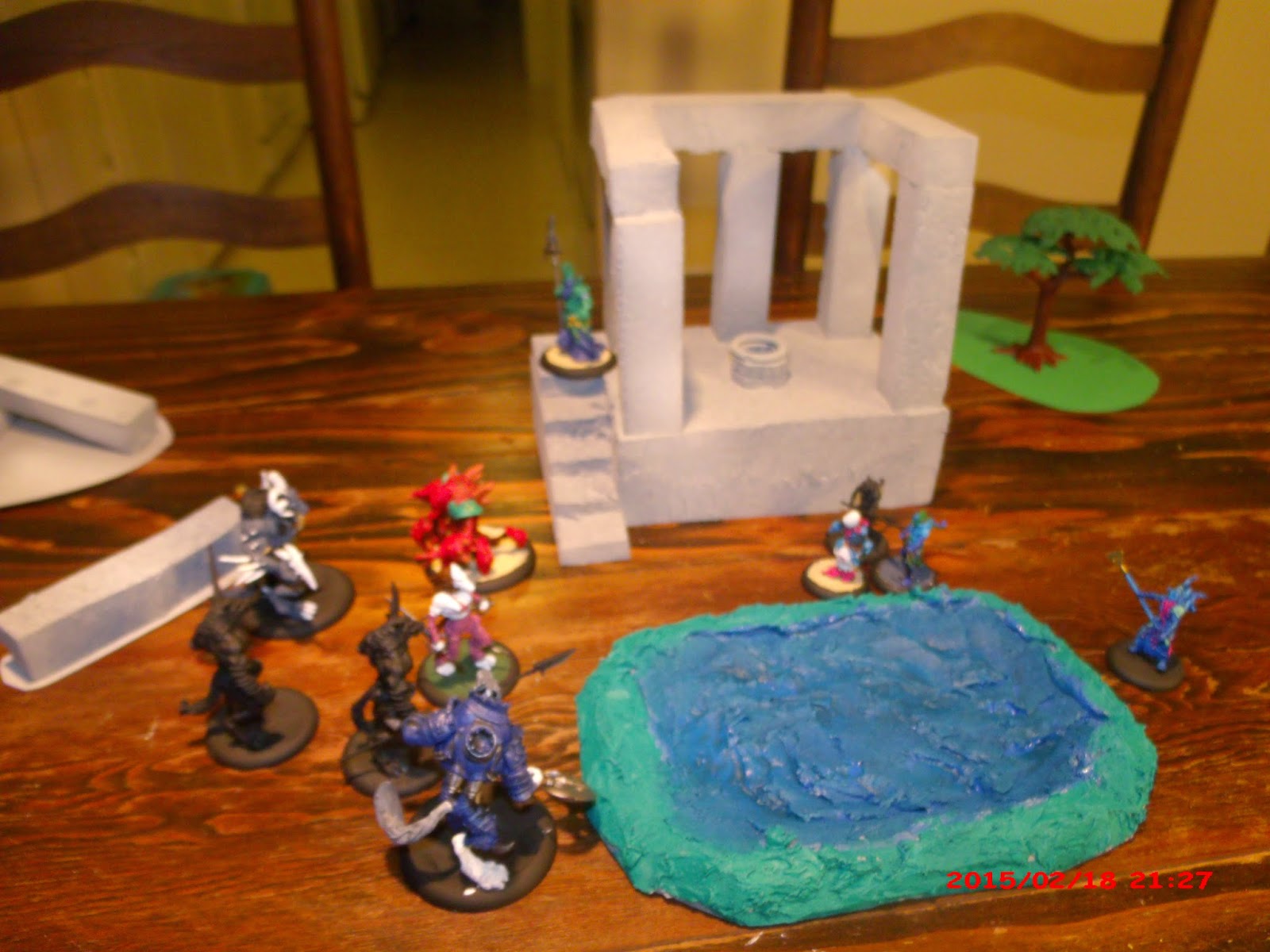 But wait!  The Wulfkin Pack swarm in again and the Wulfkin Dreadnaught's Heavy Weapon slaughters the Man'o'War Veteran with a Gruesome Kill, his Squishy body unable to defend against it. 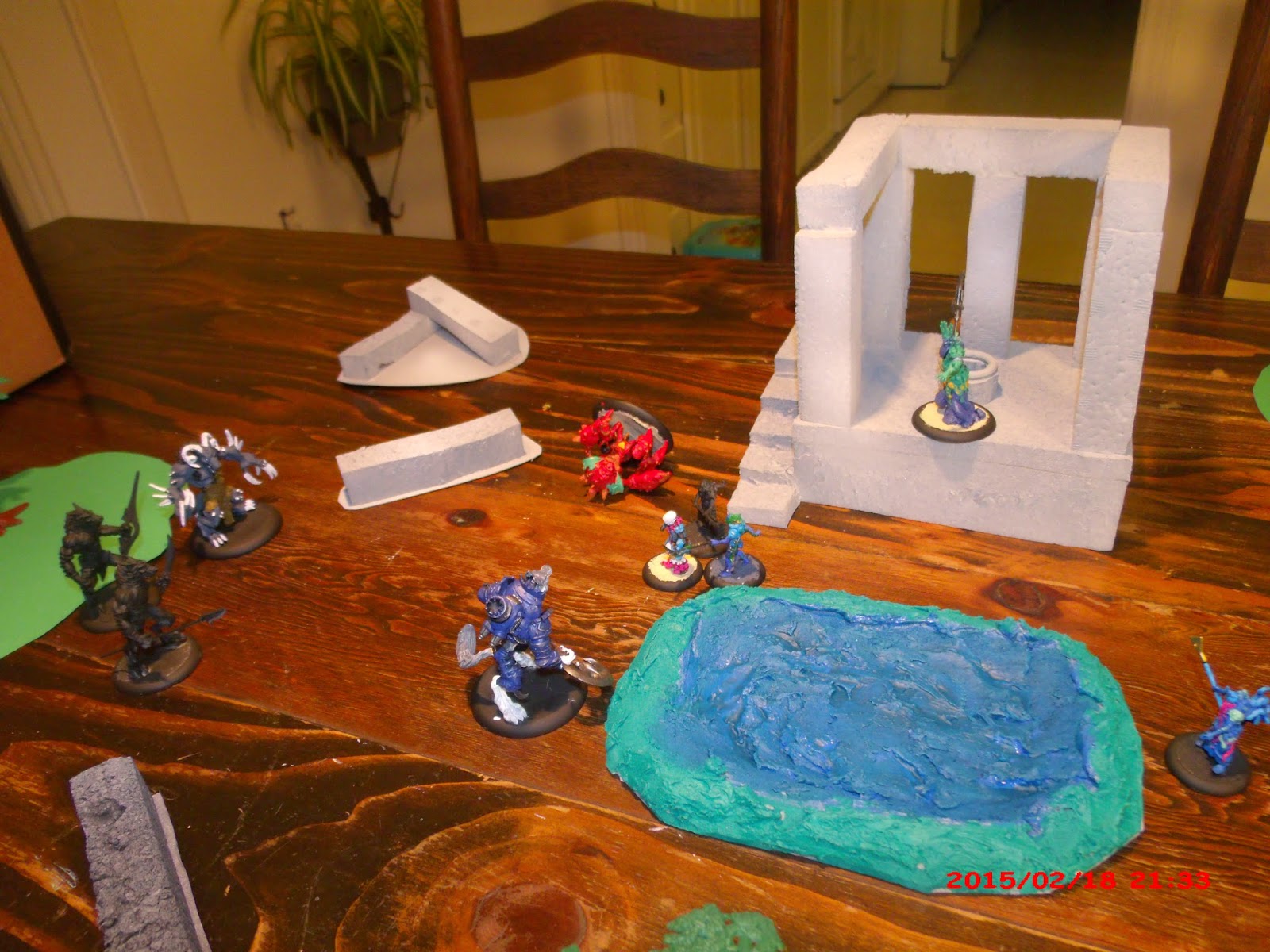 All is not lost for the sea-dwellers.  The Slow Man'o'War leading a duo of Abyss Spearmen group advance, slay a Wulfkin Bladedancer, causing a morale check as the Wulfkin were then at 50%. 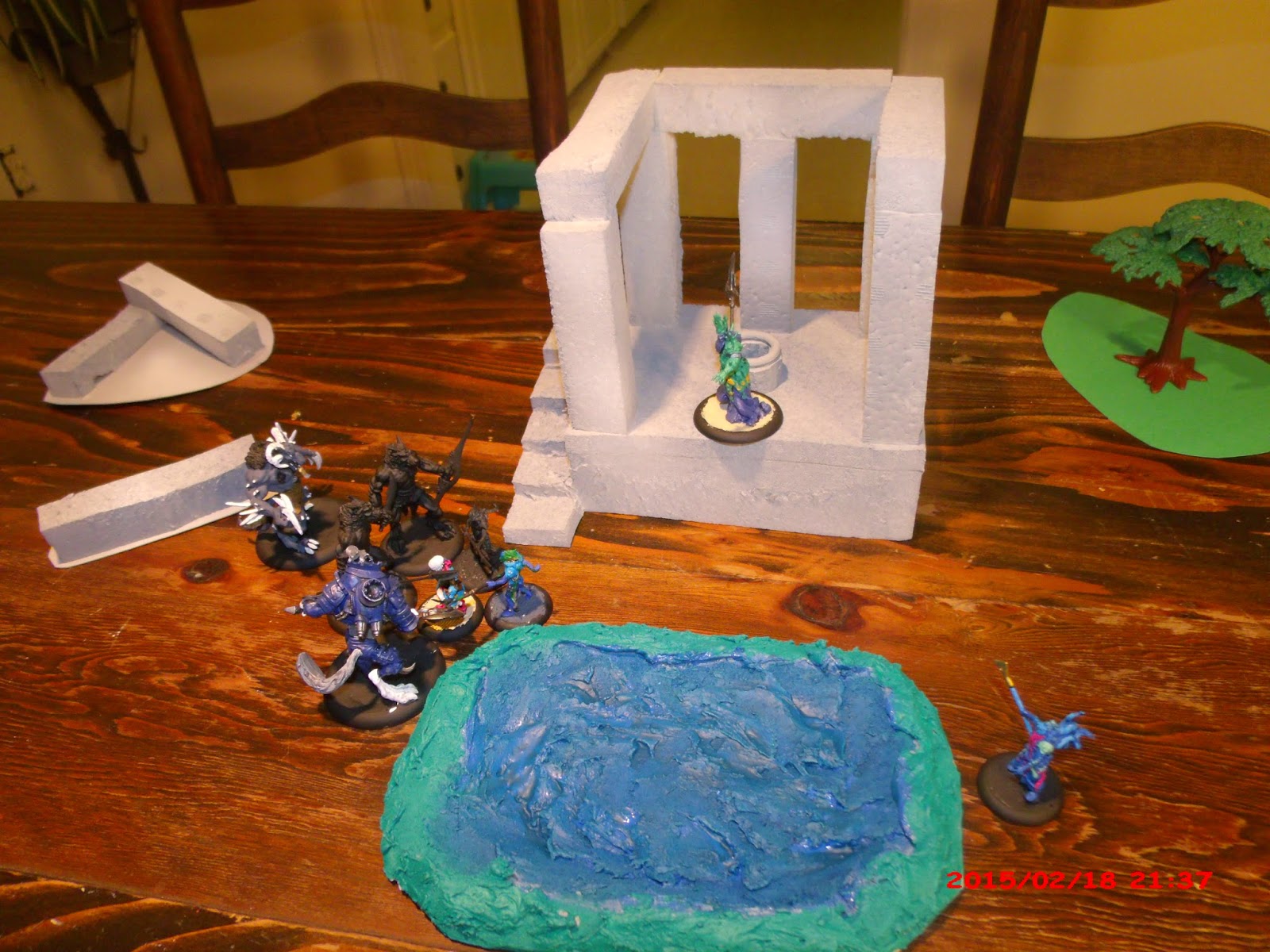 However, the Wulfkin were not to be denied.  They are relentless in their approach.  The Man'o'War's Squishy body is able to defend many attacks. 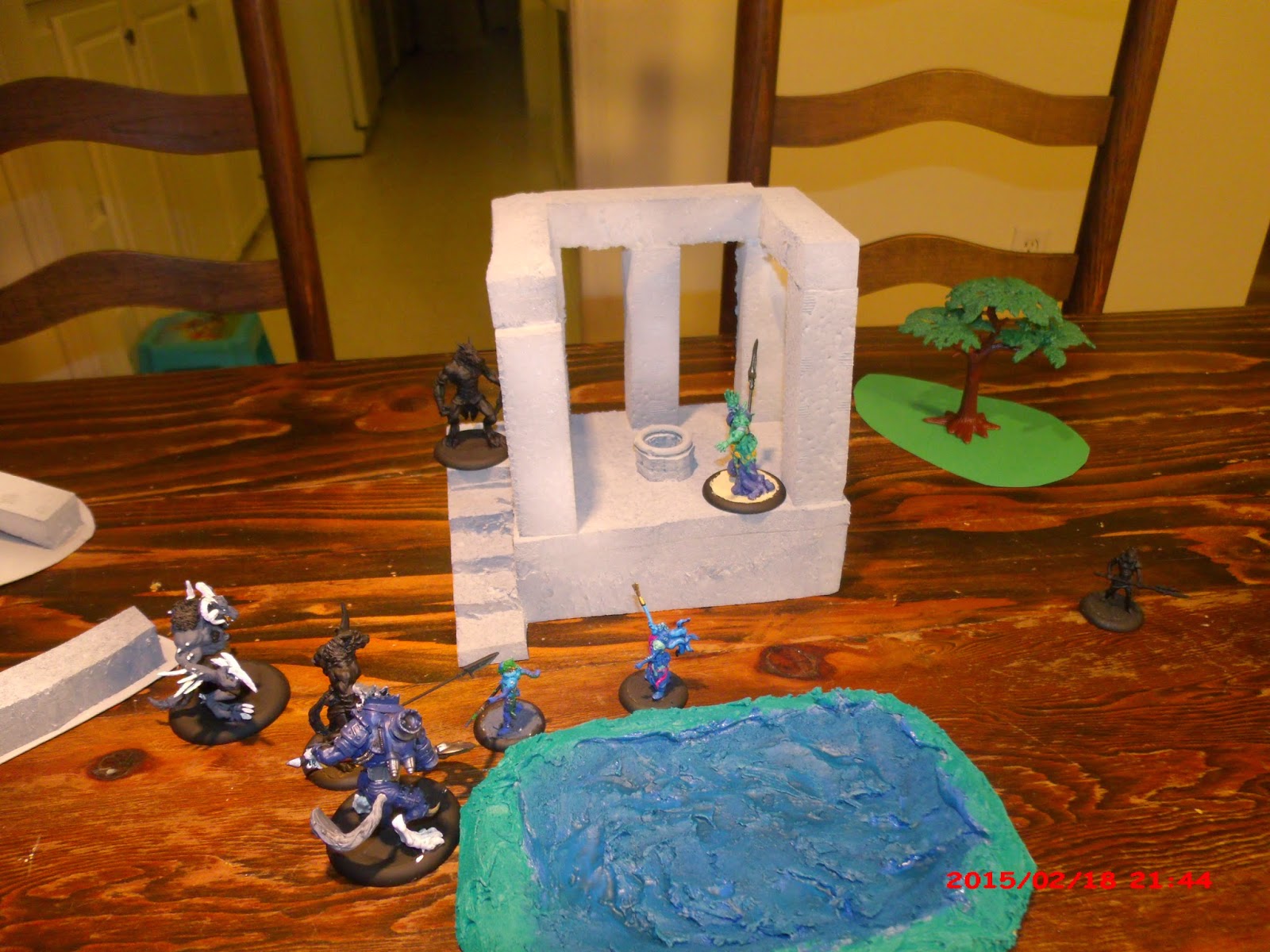 Then the Man'o'War is slain, the Tide Hunters roll for morale as they drop below 50%.  One of the spearmen flees far away.  A Wulfkin makes his way up the stairs as the leader of the Tide Hunters waits for the inevitable. 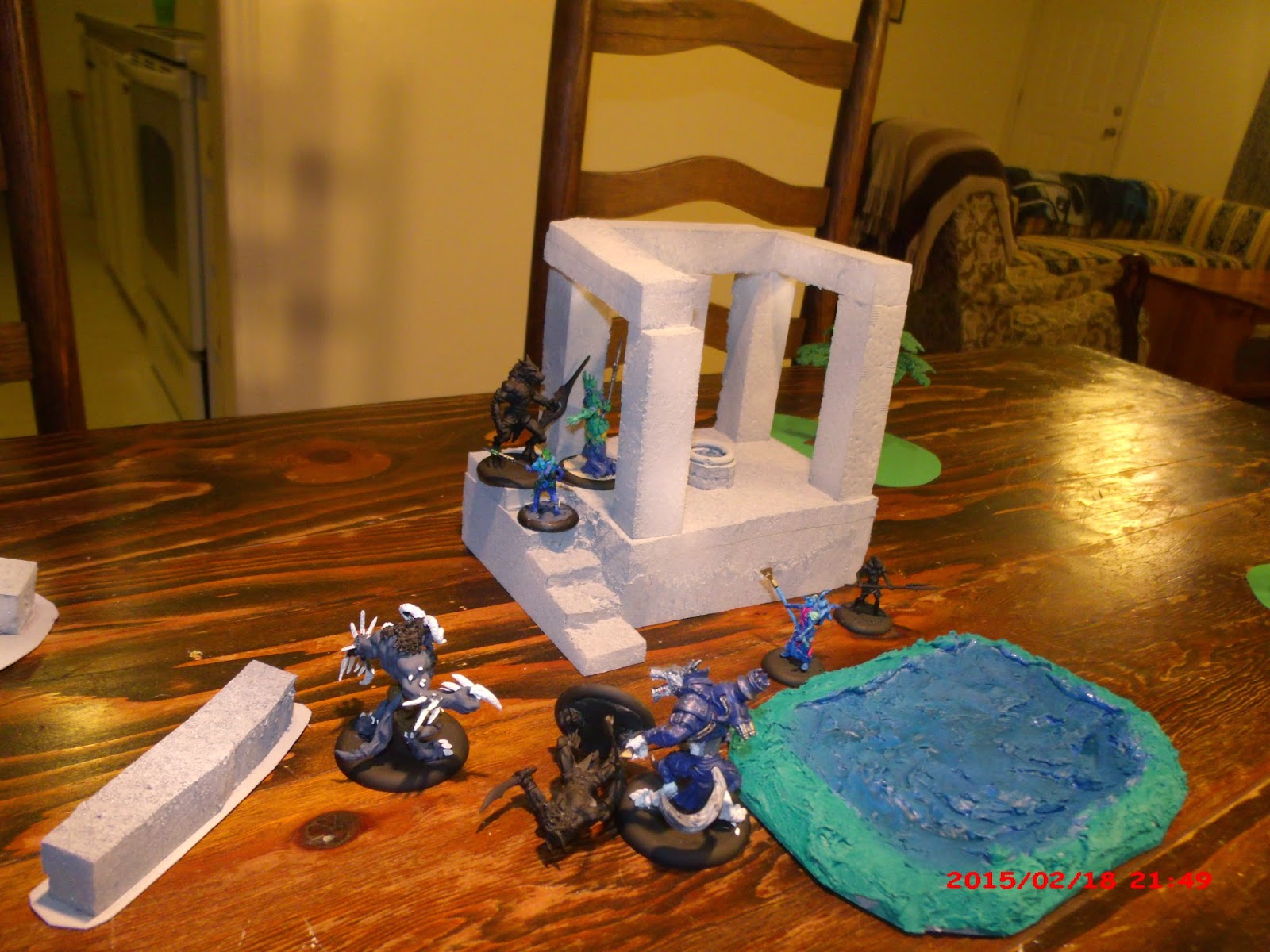 In a last ditch effort, Neptuni Regis attempts to kill the Wulfkin Warrior and to hold the temple, hoping his Abyss Spearman would help out, to at least distract the big hairy brute.... 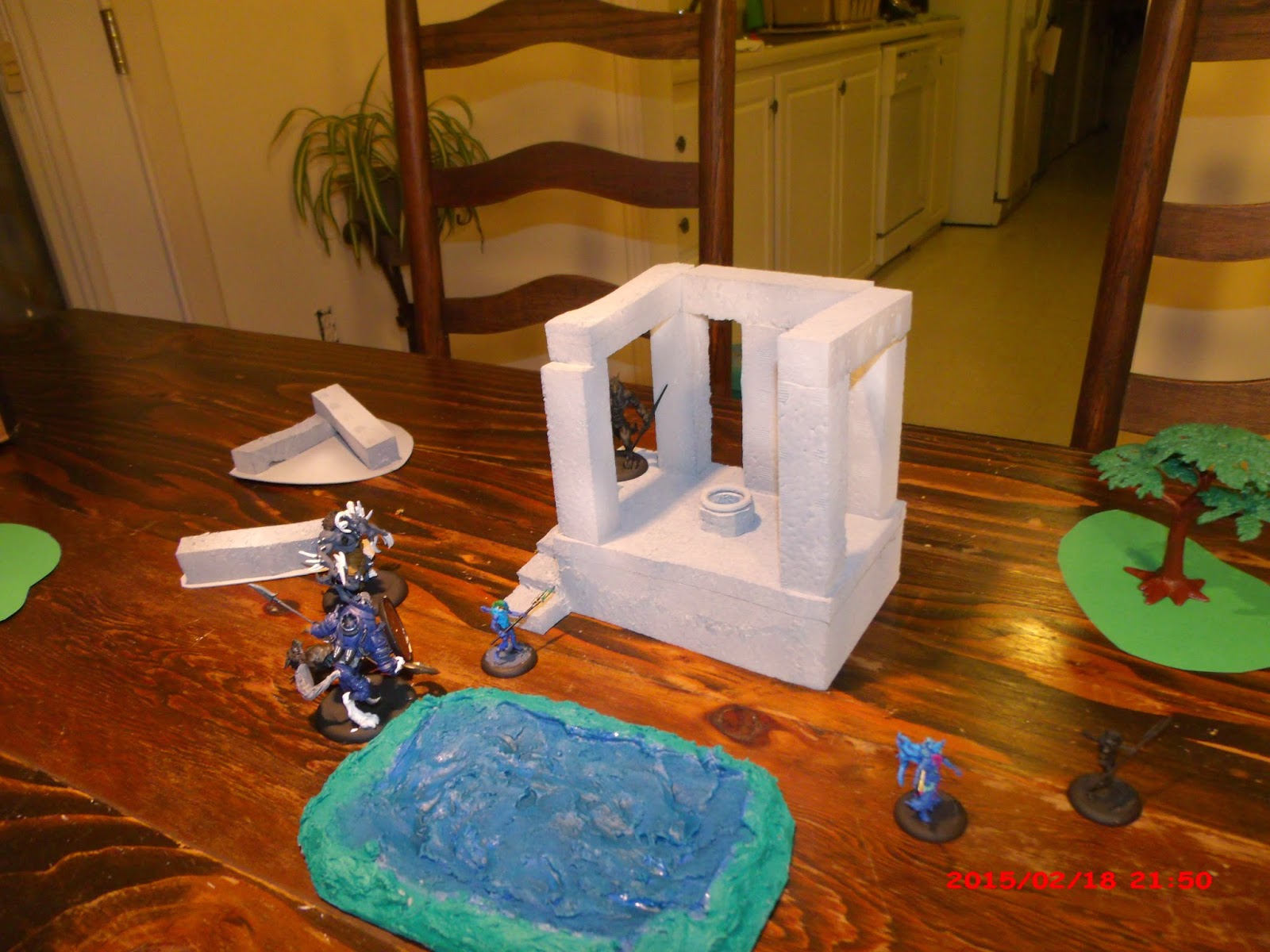 ...but it was not meant to be.  The Wulfkin Warrior deflected the thrust and the Tide Hunter leader was fatally wounded.  The surviving members of the dwellers of the deep would escape to tell the tale of their fallen leader and of the mangy dogs that claimed the sacred fountain of drinkable water.

All in all it was a delightful game.  Here are some thoughts and observations I had:

- Each warband was 398 pts, with Wulfkin spending 168 pts and Tide Hunters spending 126 pts on Personalities.  Typically SoBH would limit to 30%, but for Fightin' Fungi I appreciate the higher allowance on Personalities, especially with new magic spells involved.

- I had 2 models with Evade and Counter.  Never got a chance to use it.  Sounds good on paper.

- Heavily Armored also sounds good on paper.  But when it came time for the Leviathan to test his Heavy Armor, regretfully a +1 C after the Combat resolution was not enough to defend against his knock down or later the kill result while on the ground.

- Heavy Weapon - LOVE IT!  You would think a Power Attack then followed up with a natural roll of a 6 would be extremely rare.  It happened TWICE!  Probably just a fluke roll of dice, but currently it rocks!

- Javelin...um...nothing.  The two spear-wielding Wulfkin had the Javelin trait (javelin/spear same difference).  Each time they moved and tried to toss a Javelin they were out of range.  One of them rolled a natural 1, so no more Javelins.  Need to ask if the Javelin can be thrown on multiple range bands.

- Squishy came up a few times for the Man'o'War.  I was lucky to roll natural 6's a couple of them.  It prolonged his life for a little while.  Definitely useful and thematic at the same time.