The kids and I did some more painting of Reaper Bones II miniatures.  So naturally they wanted to play some SoBH.  I offered to just be a side-line referee and let them fight it out.  But then an inspiration came to me.  I had just finished painting some big monsters.  Thus begins a Monster Hunt.  3 VP per slain monster.  They would be neutral creatures, moving random at times and towards the nearest 'food' source.  For the most part they were Q 3, C4, and Big, with a couple different traits. 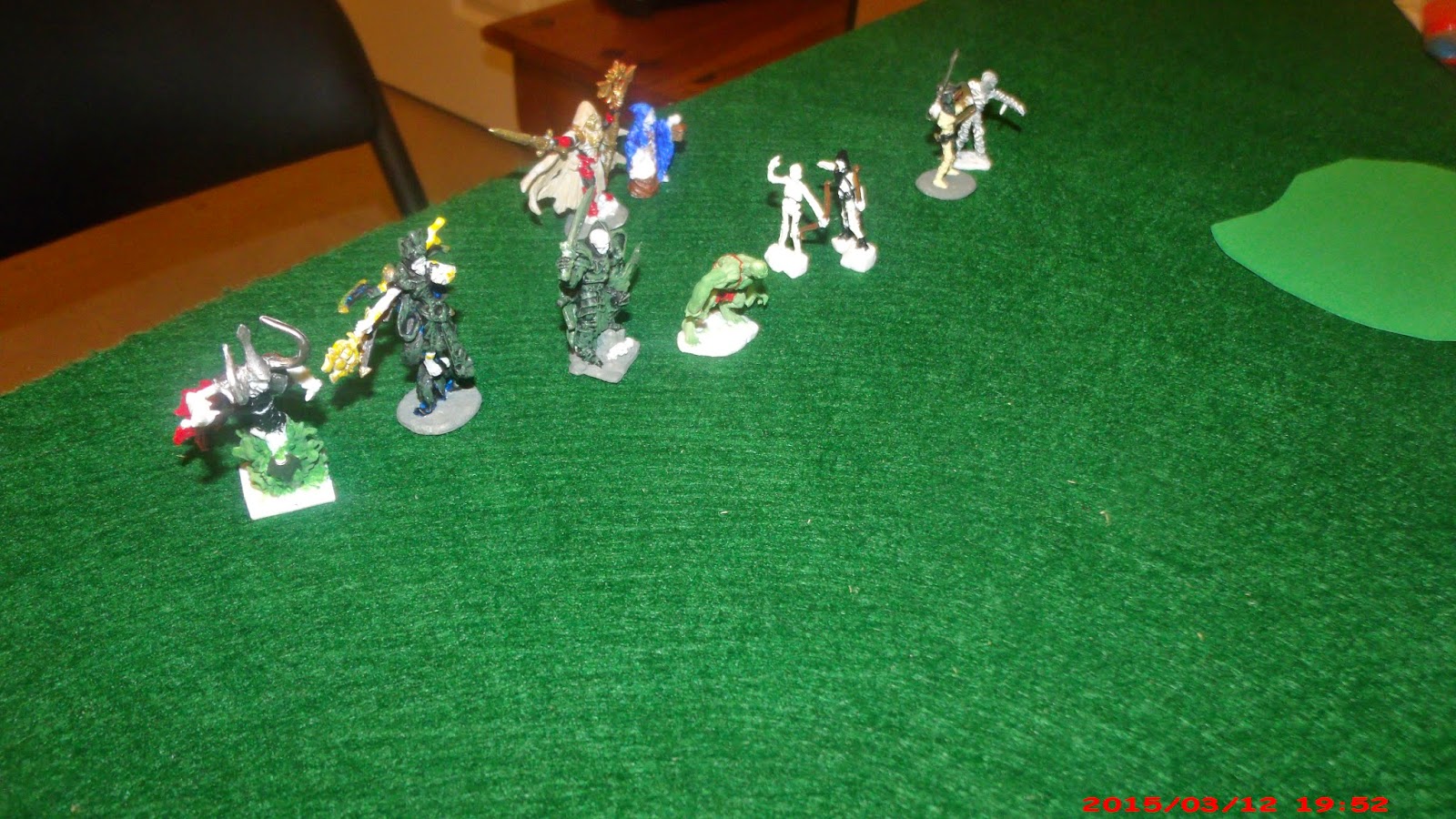 My son brought some more undead.  One Lich that had Fireball and Wall of Fire.  A Lich with Lightning Bolt.  A Necromancer and miscellaneous undead types. 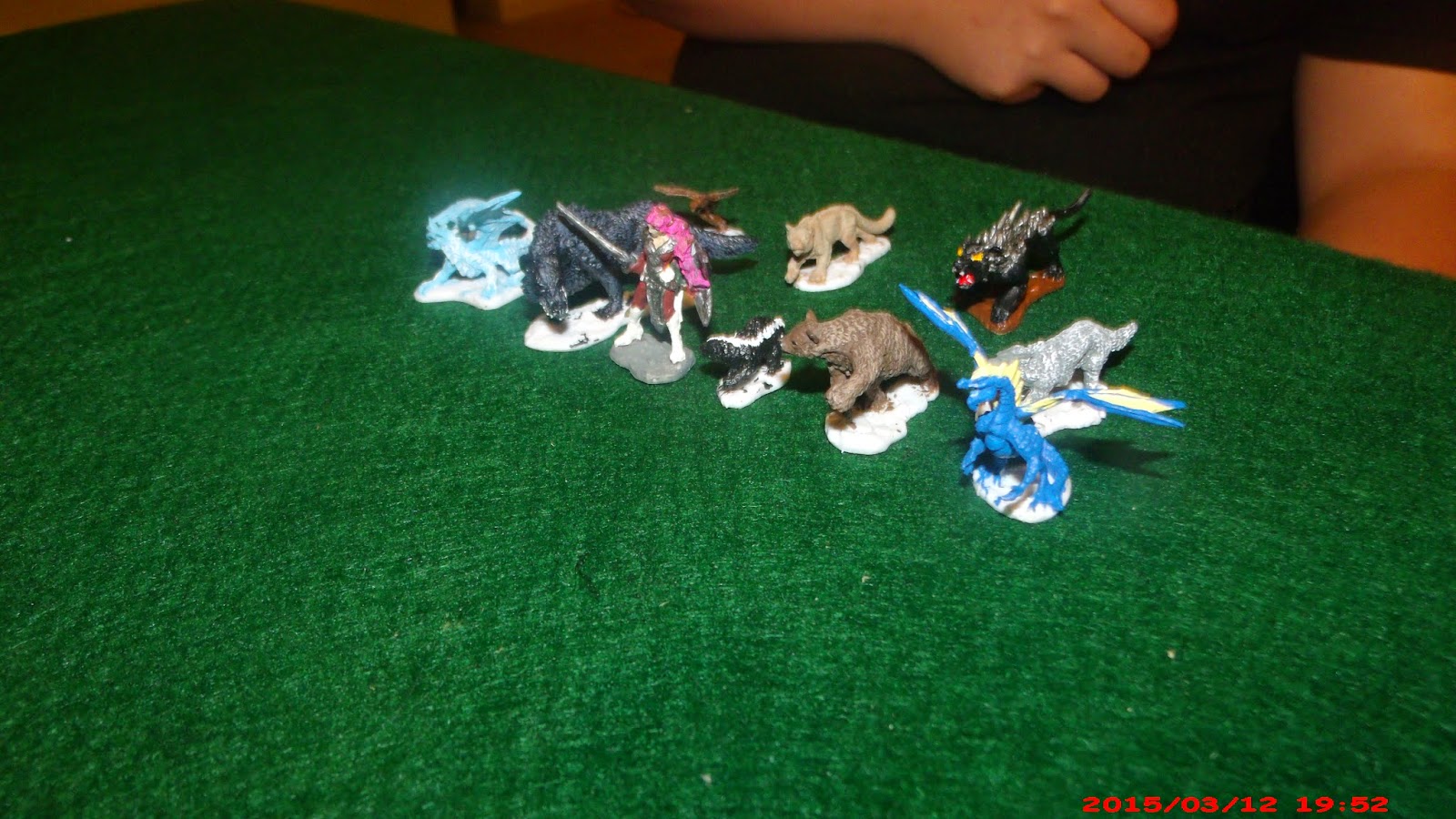 Eldest daughter had her friends of the forest.  Led by an Elf Knight, the majority of the warband were various animals.  Added to it was a White Dragon with Wall of Ice, and a Blue Dragon with Lightning Bolt. 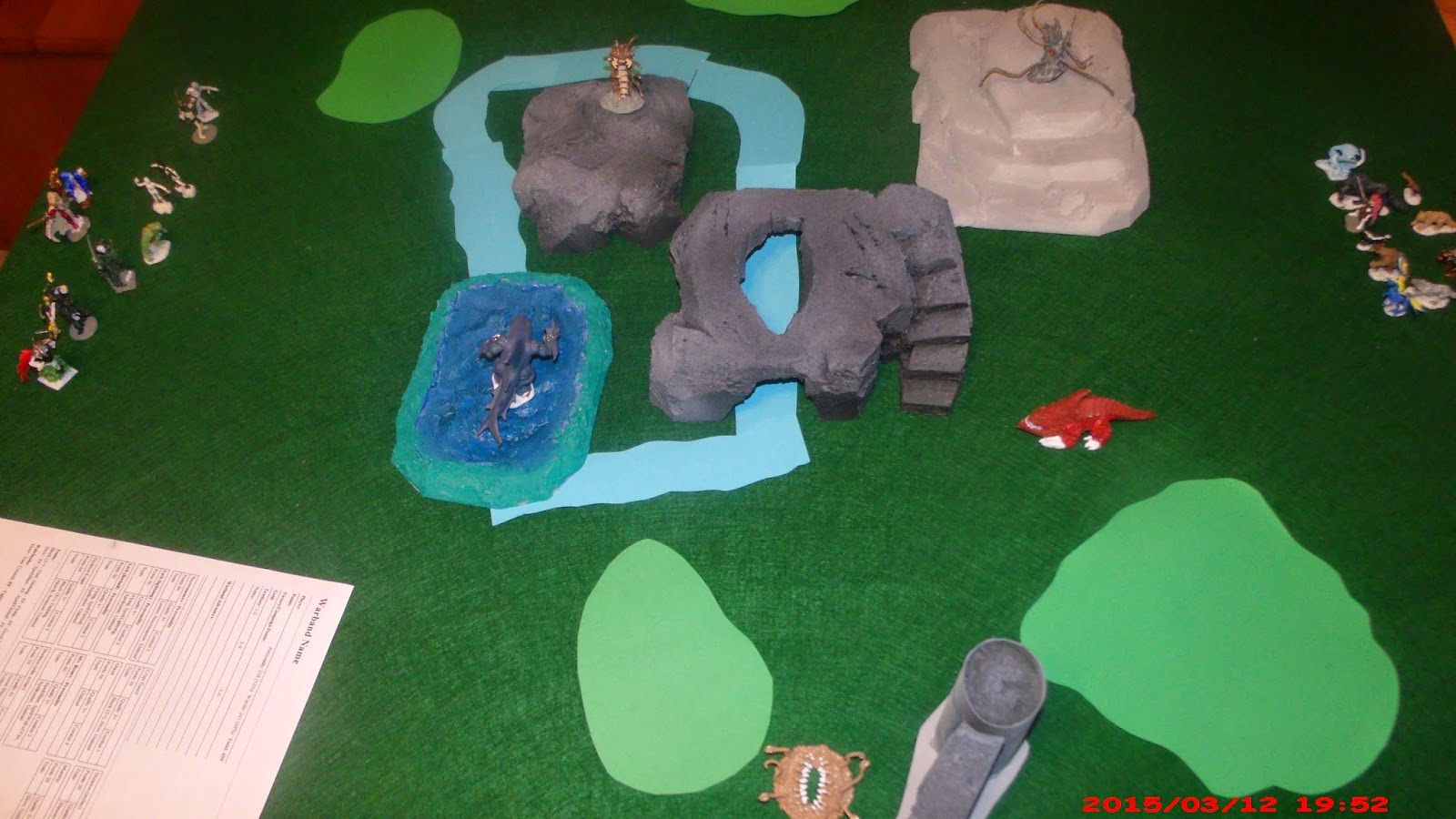 Here was the set-up.  On the top left hill was an Ankheg, it can Burrow.  In the rectangular pond is the Were-Shark, a Tough Dashing monster.  All the way in the bottom of the picture is the Maw of Terror, he can Burrow and had Combat Master.  Top right hill had the Roper, a Burrowing Combat Master.  And the red beast near the steps of the central hill was the Bulette, a Tough Burrower. 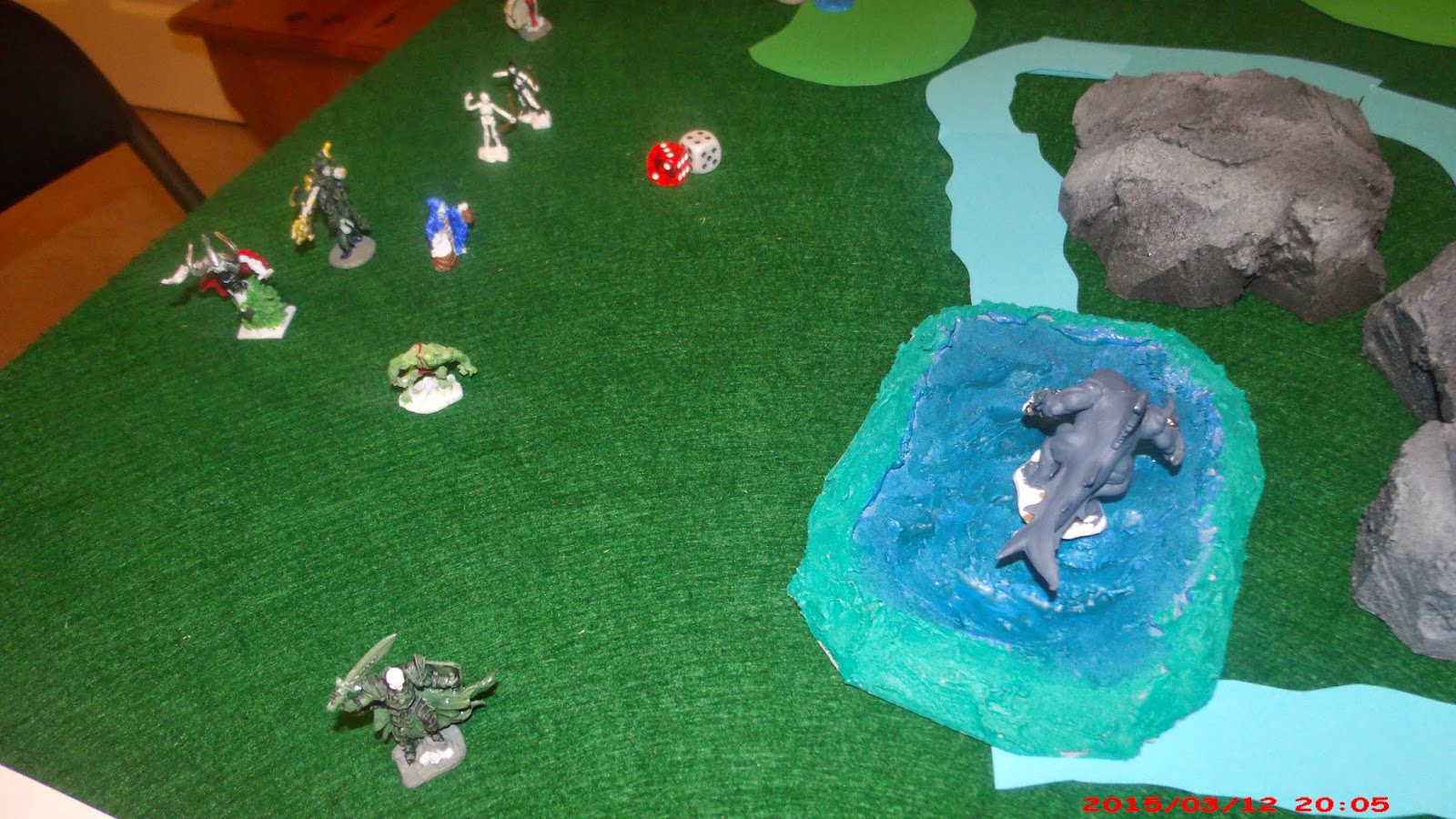 Son's undead advance.  Yet once a turn-over is rolled, I get the opportunity to Activate the monsters. 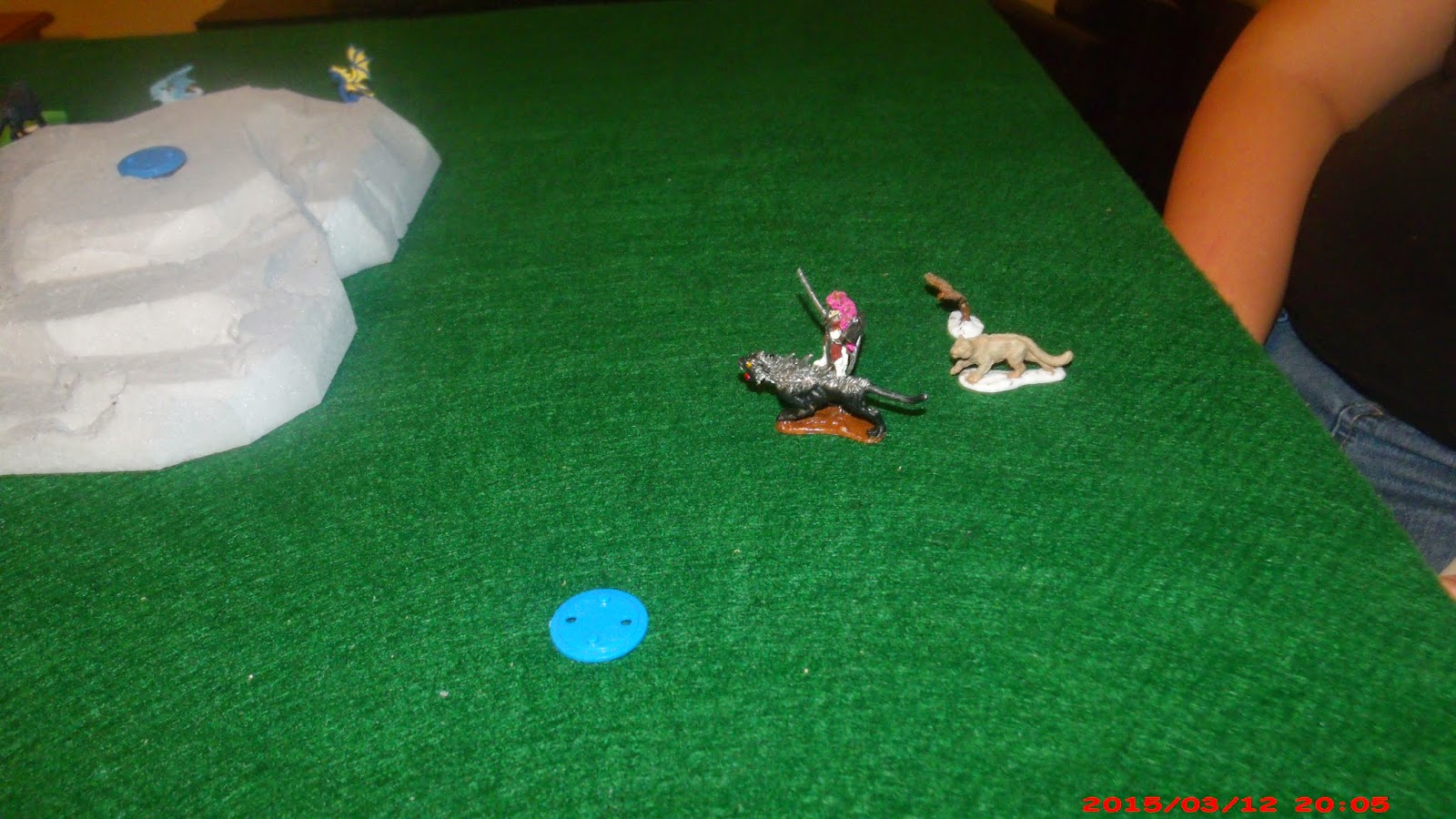 The Bulette is Burrowed and advancing to the daughter's forest friends.  The Roper had also Burrowed on the hilltop. 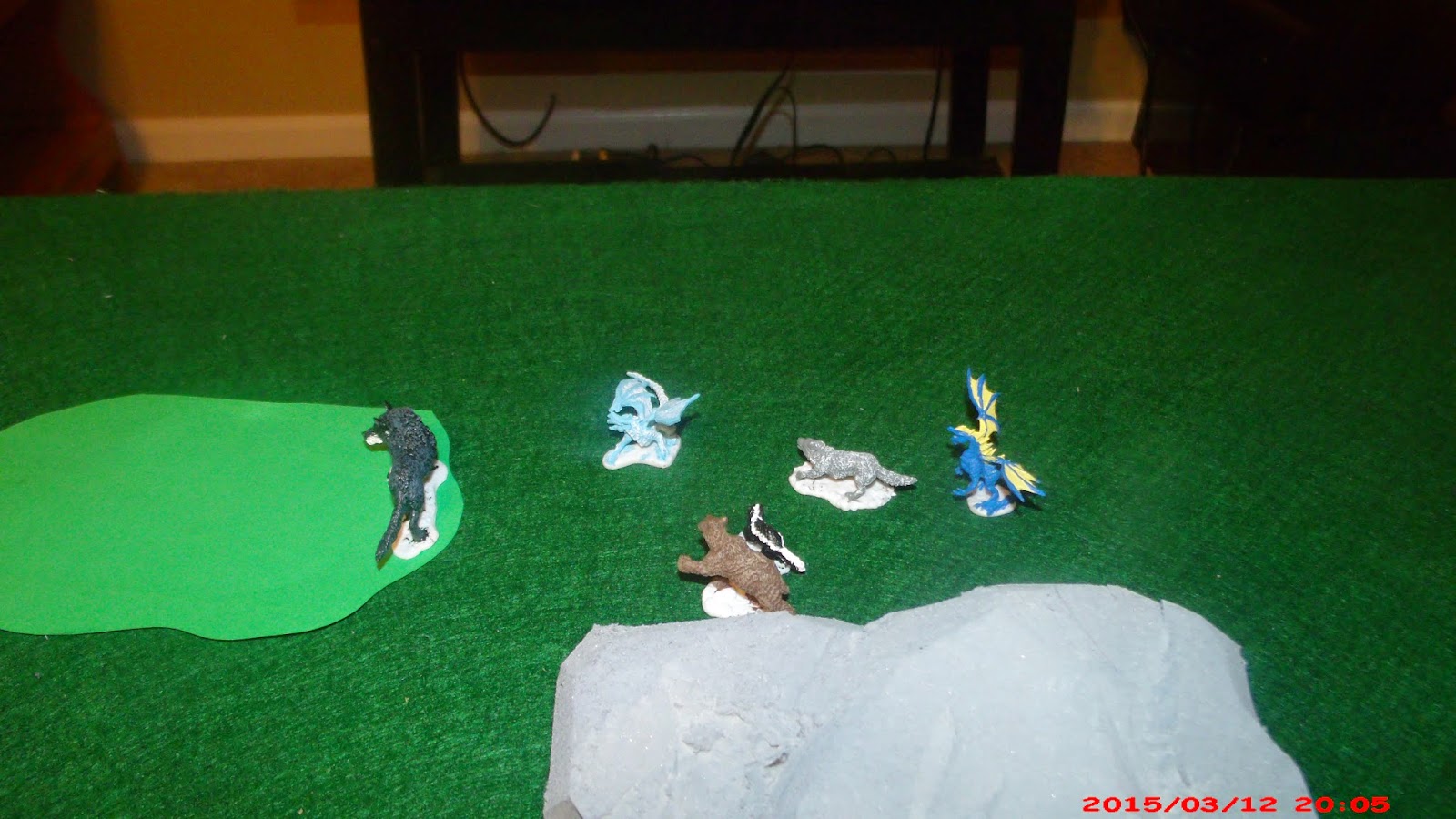 The rest of her animals scattered around the hill. 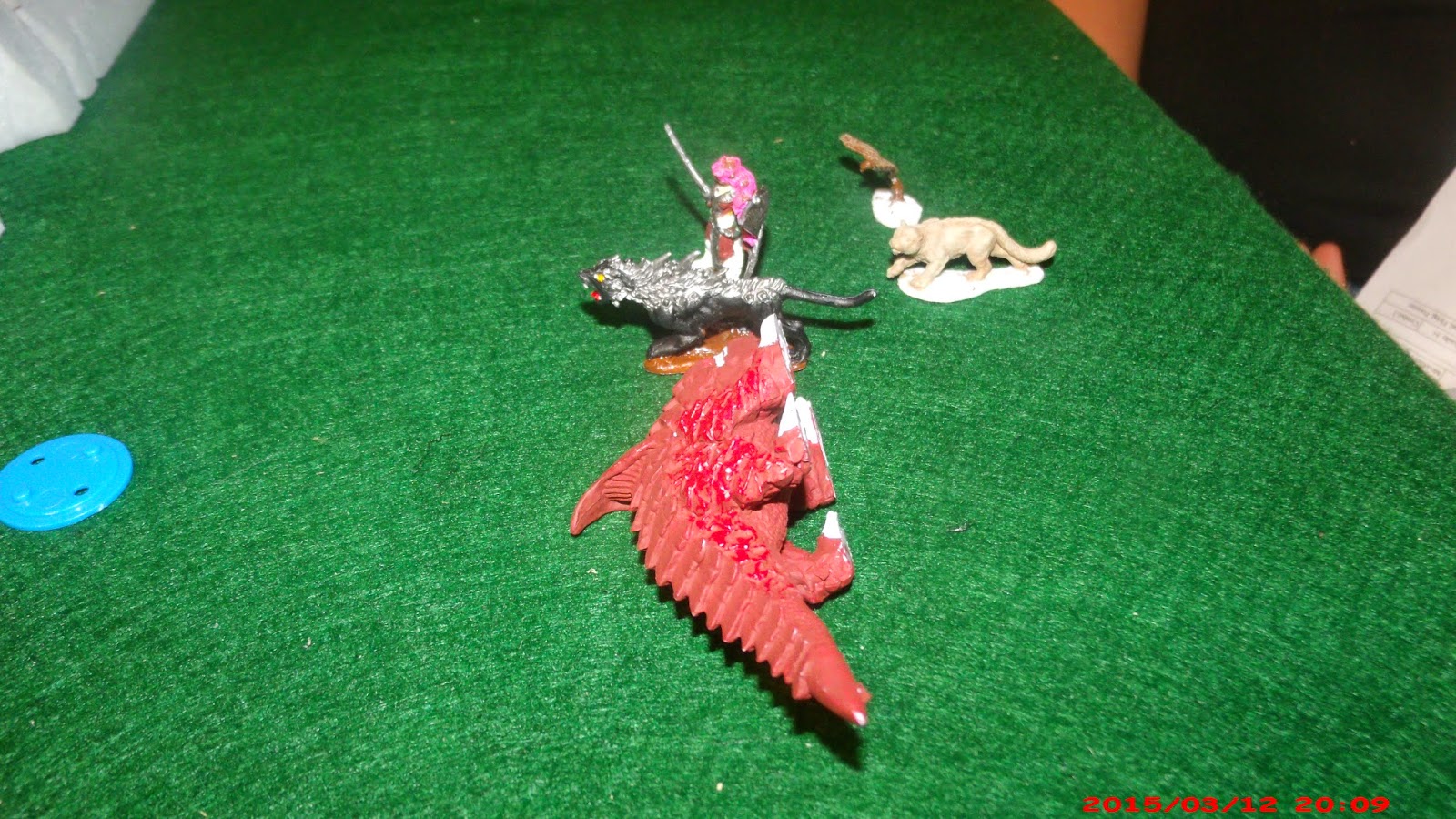 The Bulette pops up to eat her Hound, but subsequently is 'knocked down'. 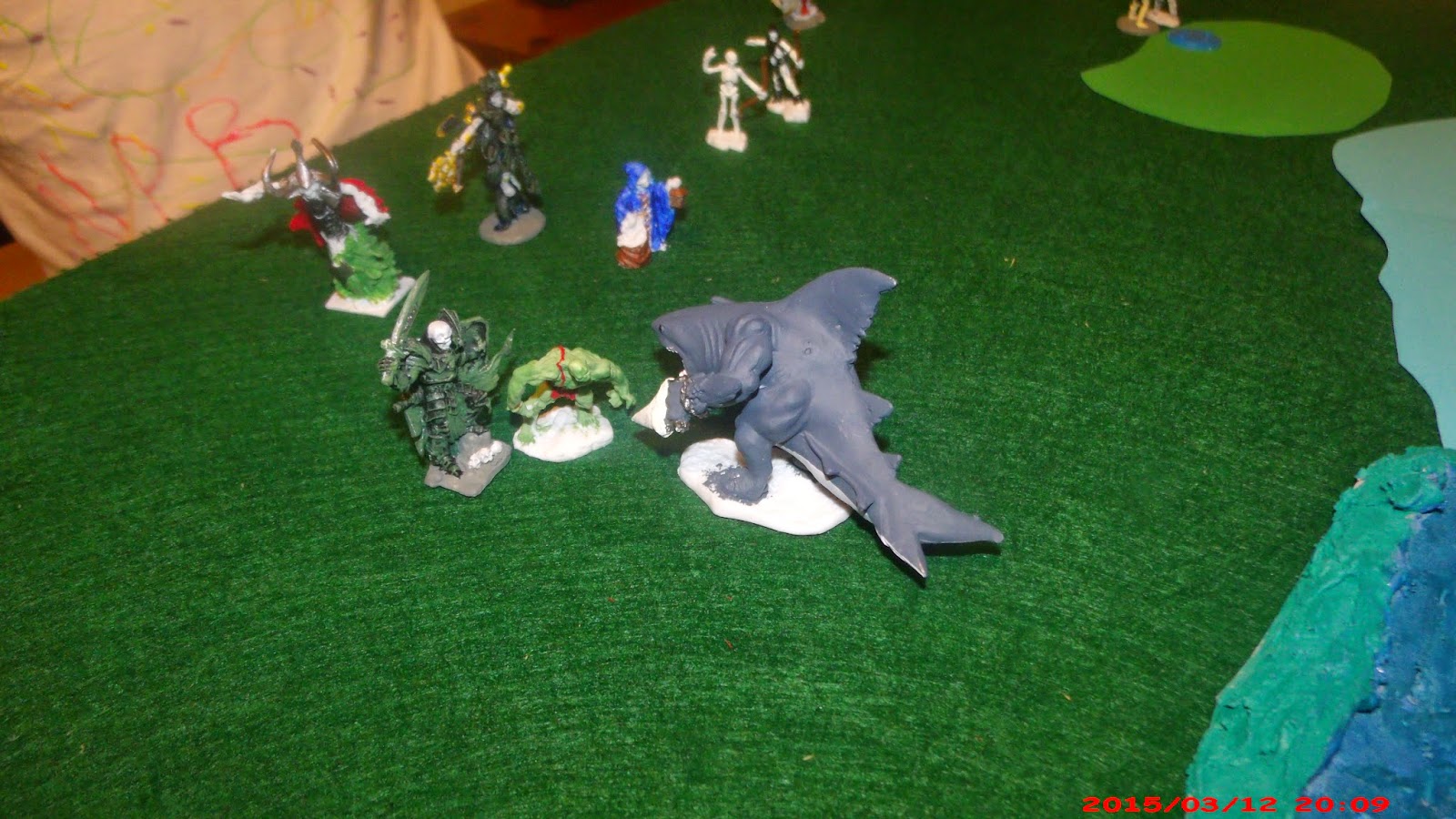 The Were-Shark would assault the undead ghoul and skeleton knight. 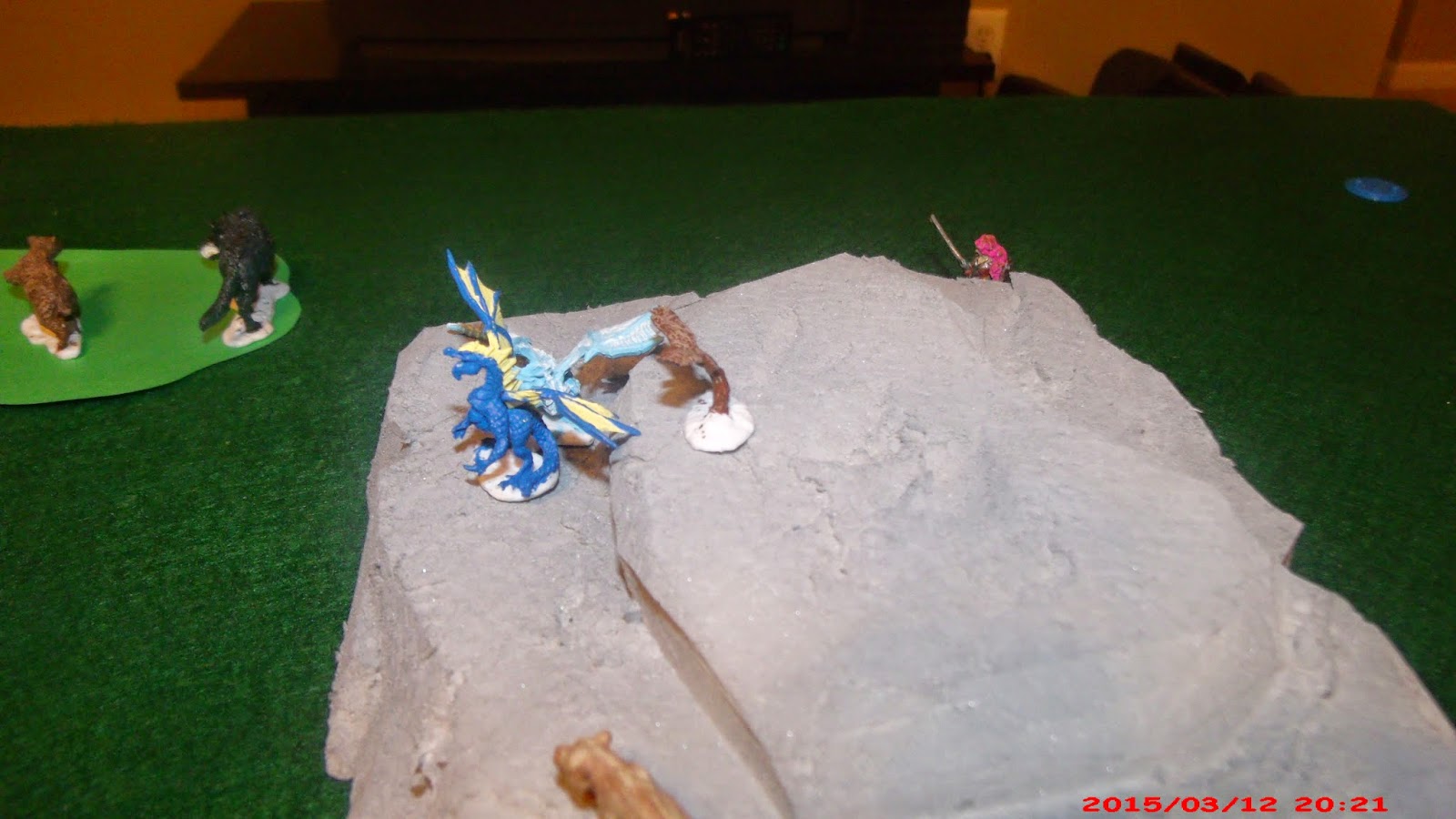 The animals would then circle back over the hill. 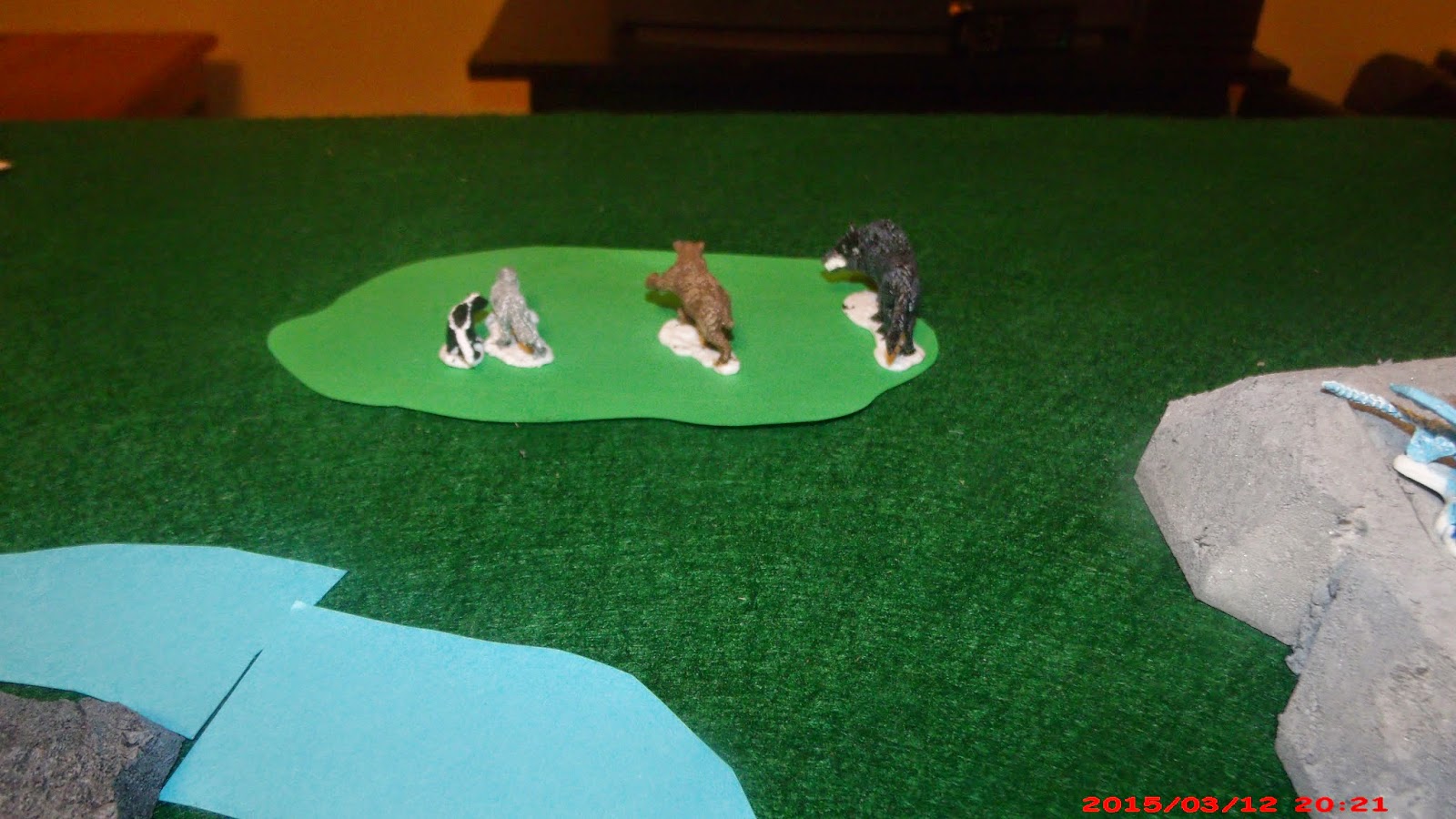 More animals enjoying the forest prior to joining a confrontation on the other side of the hill. 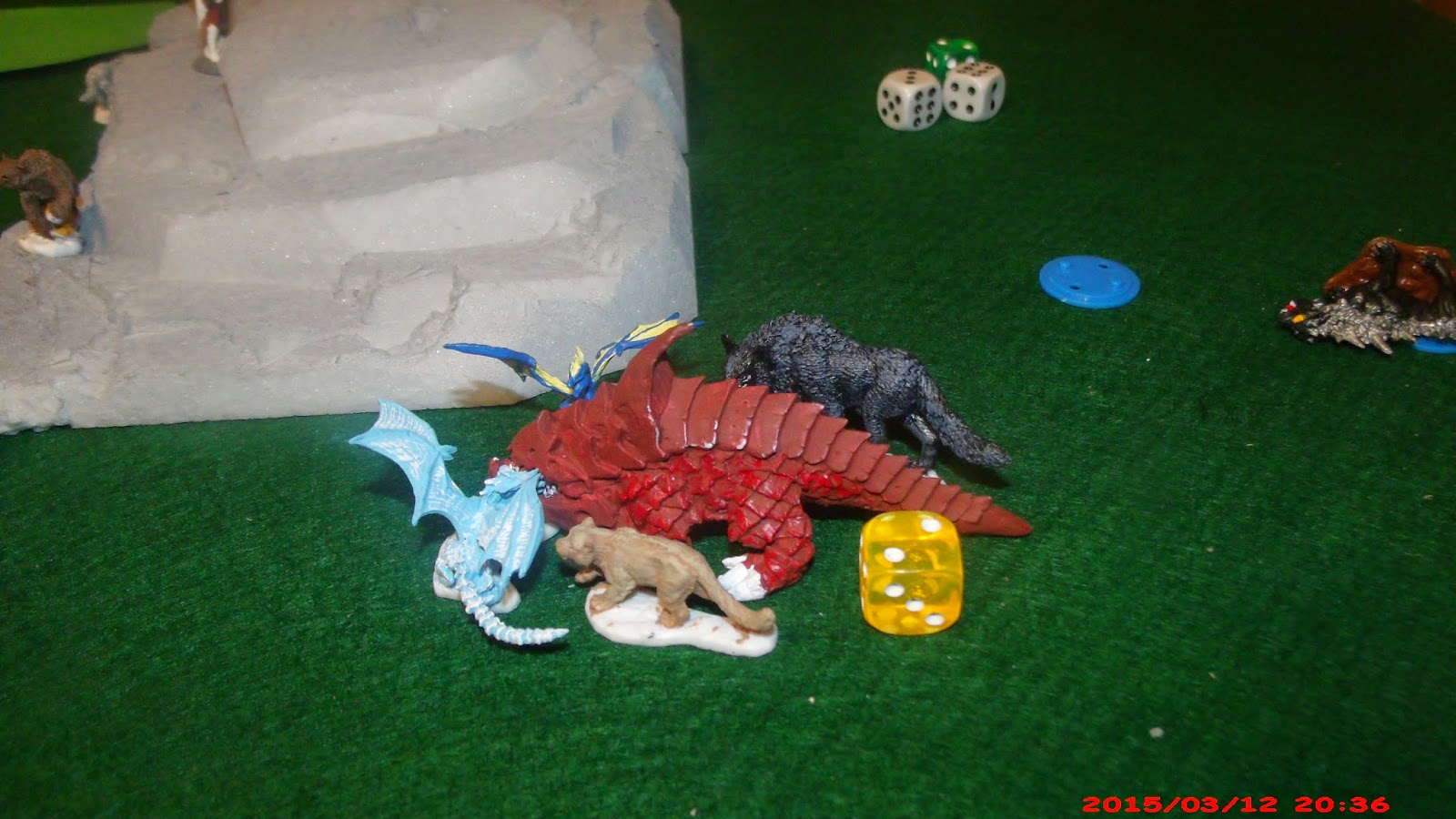 After chewing the Hound in revenge, the forest friends attempt to surround the Bulette. 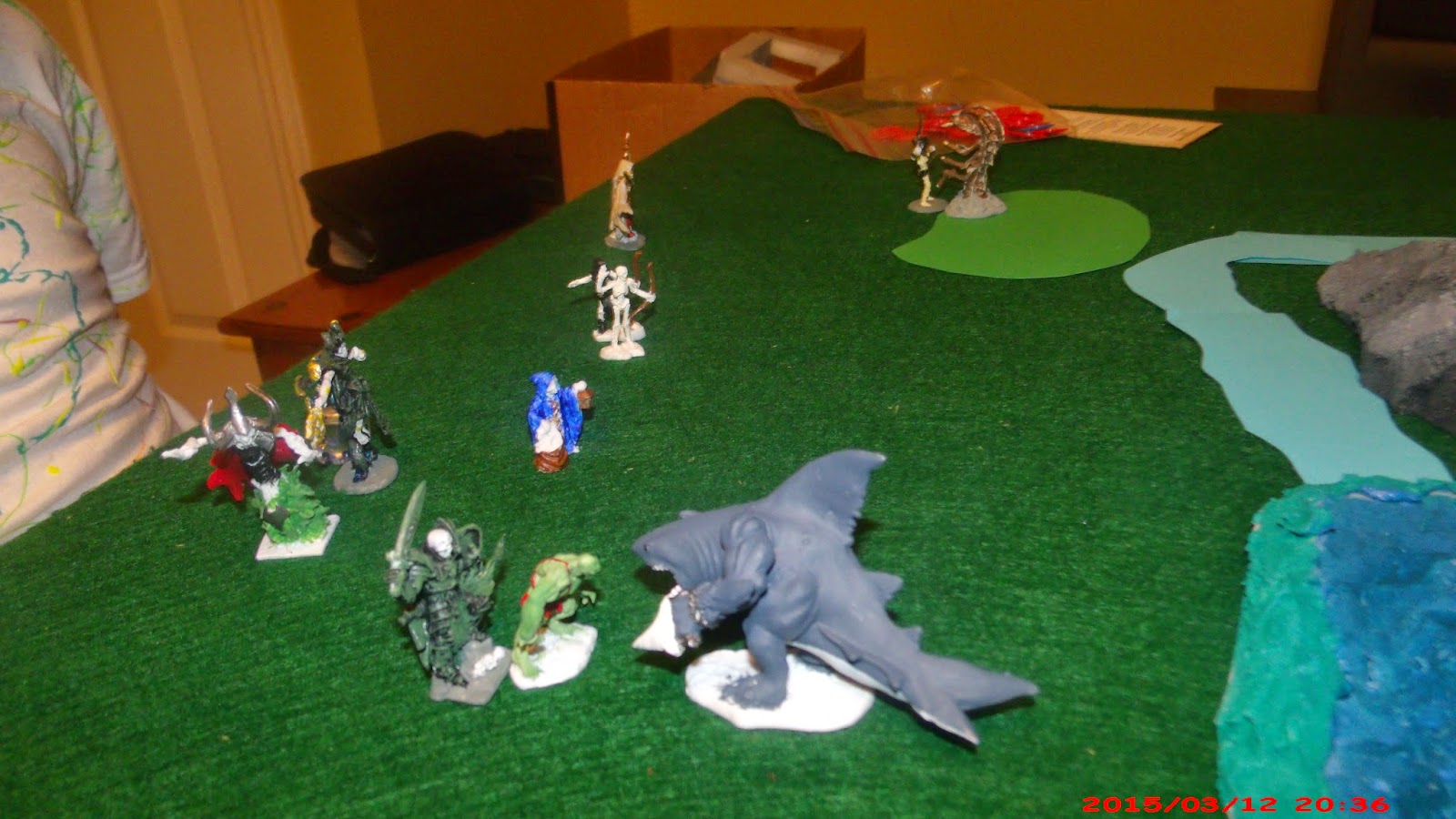 The Were-Shark and undead ghoul would fight a constant back and forth battle the rest of the game. 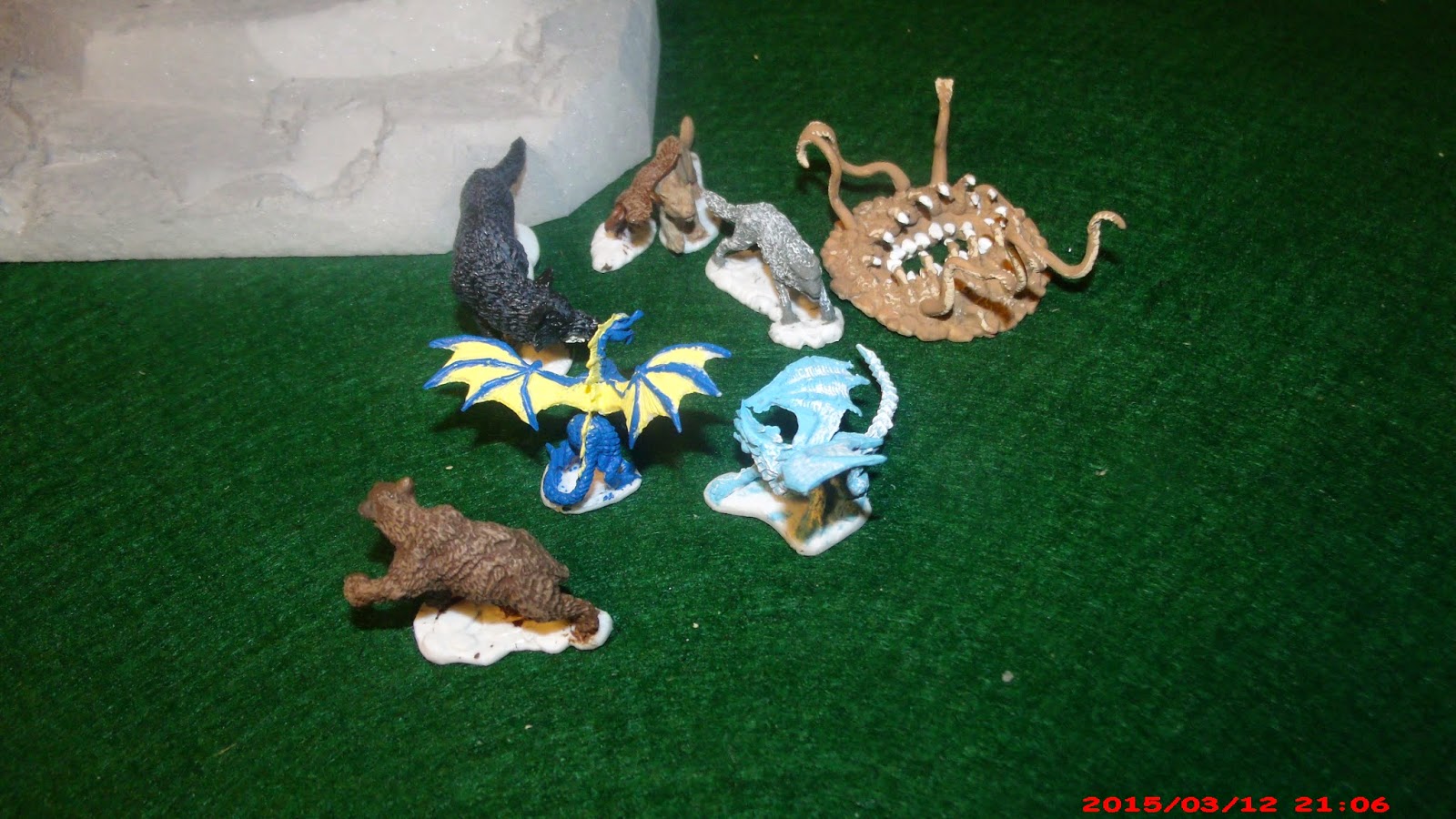 The animals finally finish off the Bulette just as the Maw of Terror pops up from underground. 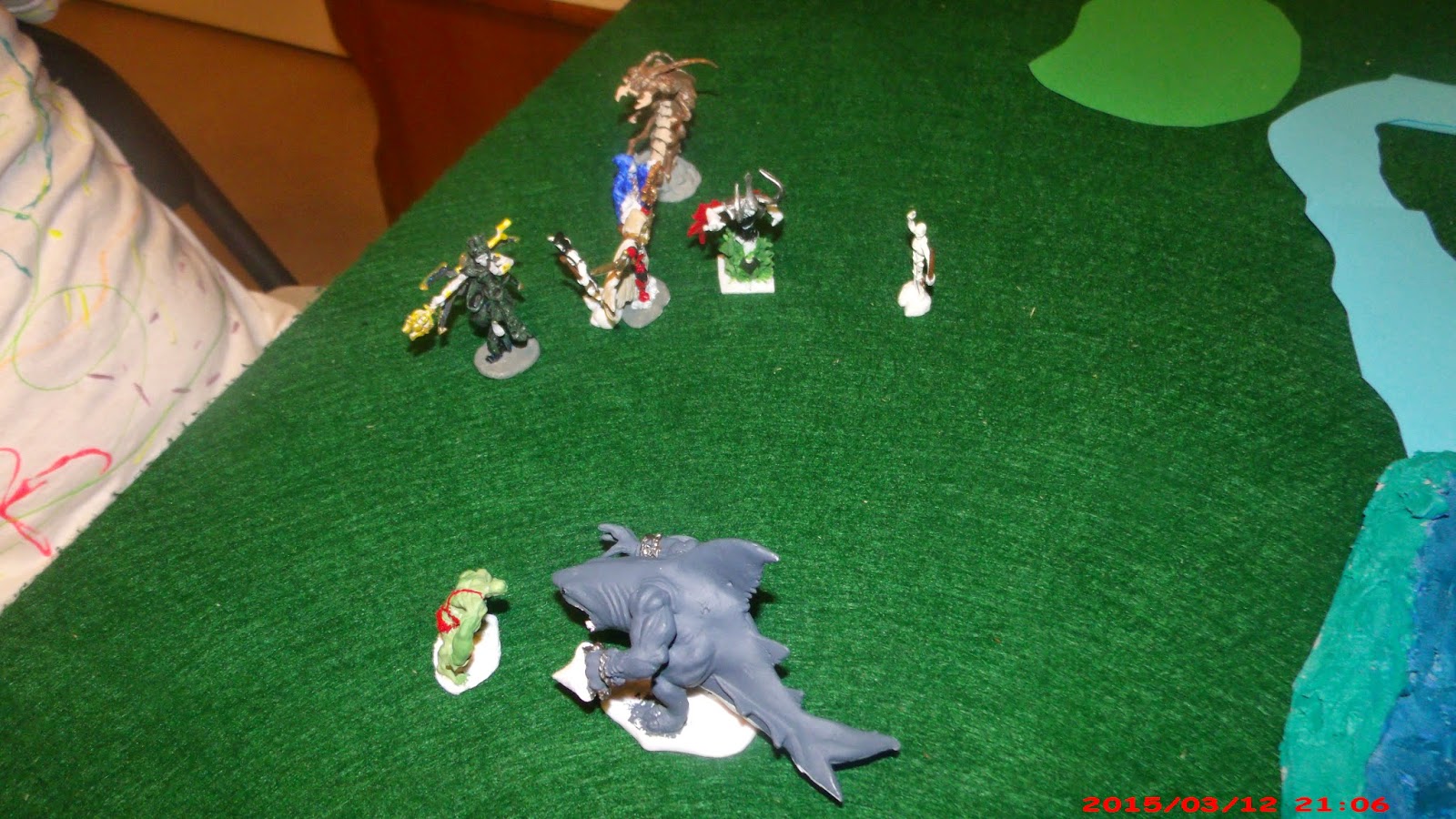 Were-Shark finishes off the skeleton knight as the Ankheg advances into the undead party. 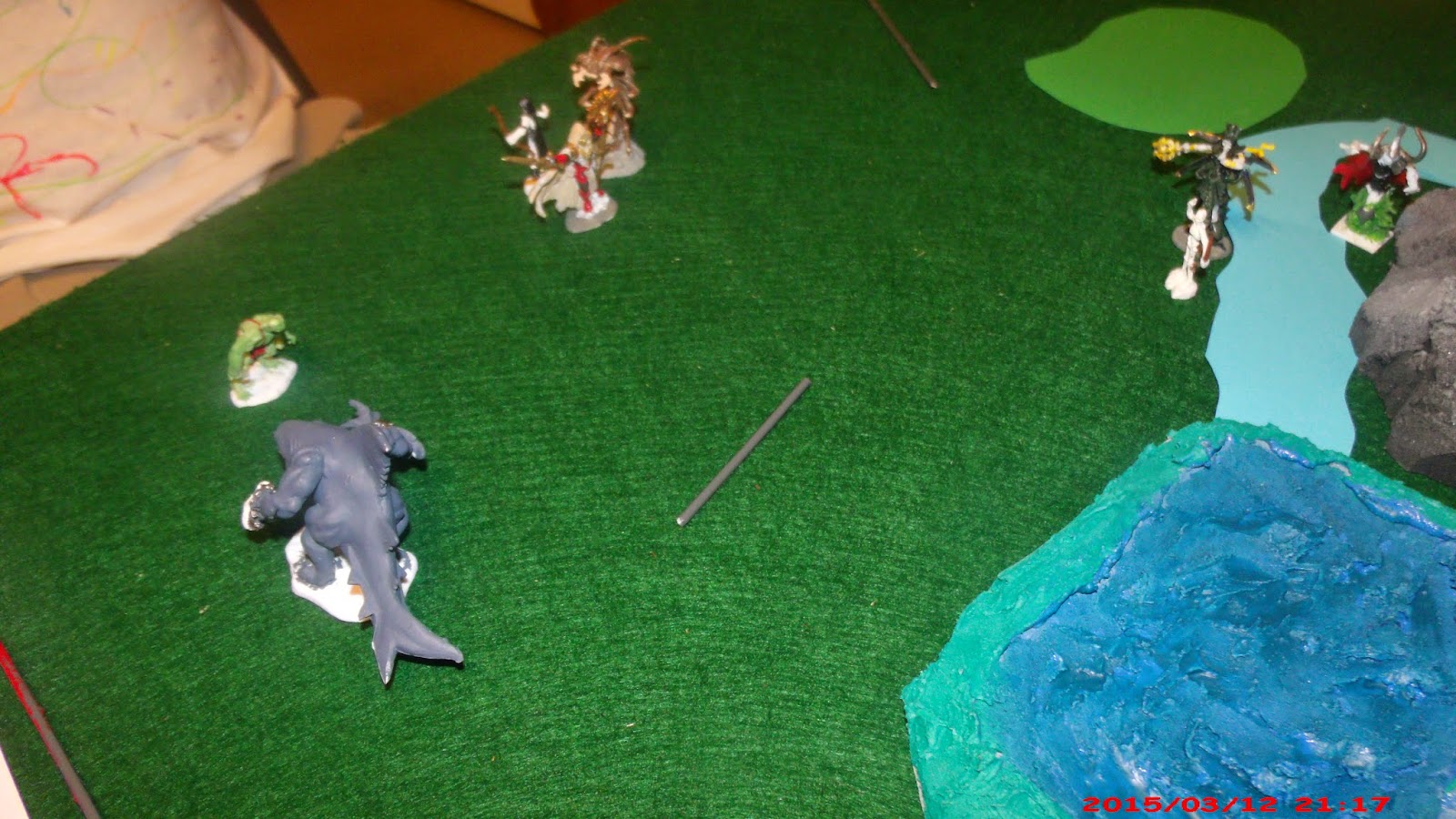 The undead scatter away from the Were-Shark and Ankheg. 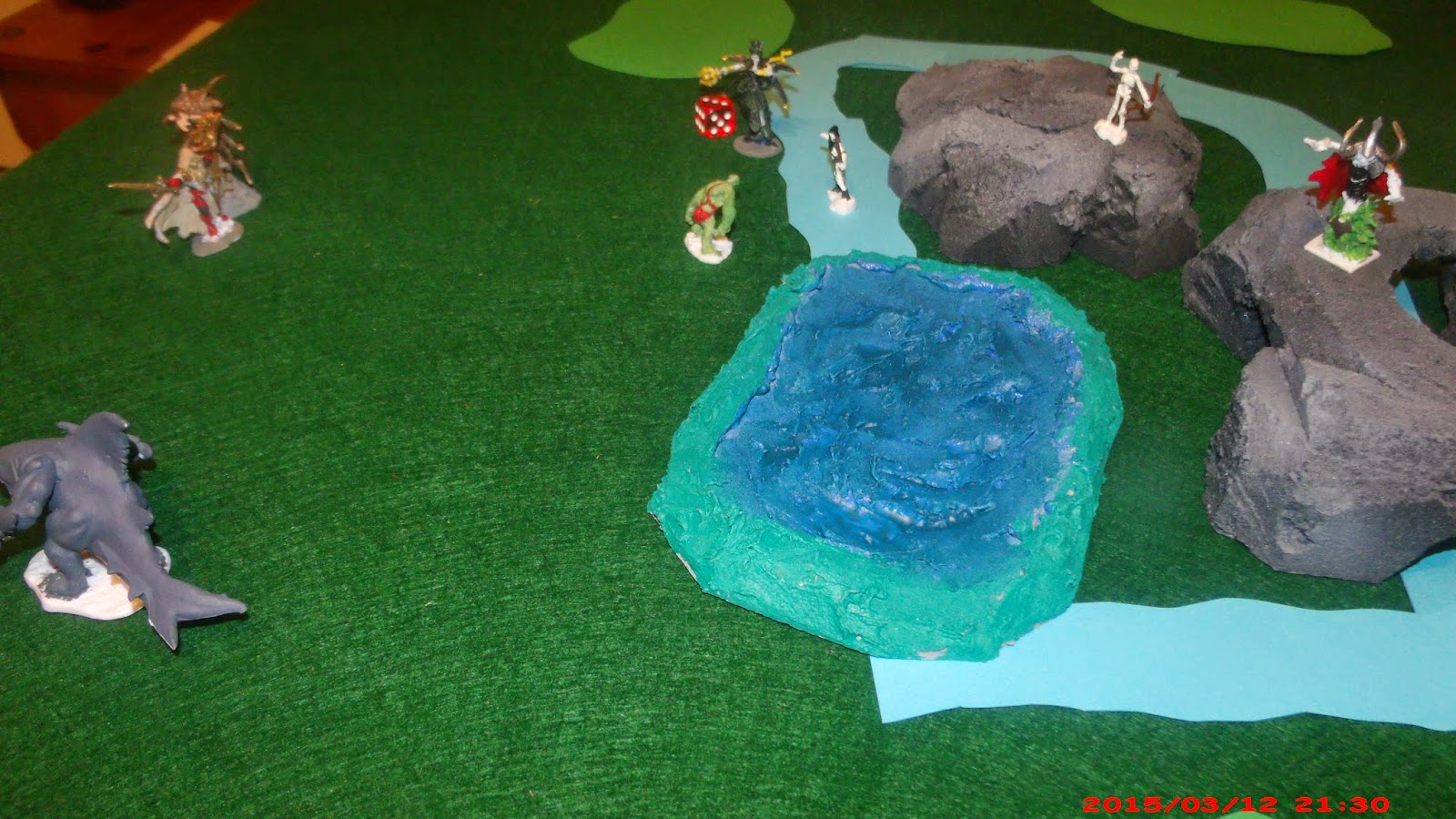 Just prior to the Necromancer Leader being demolished by the Ankheg, the remaining undead would survive the morale rolls to follow. 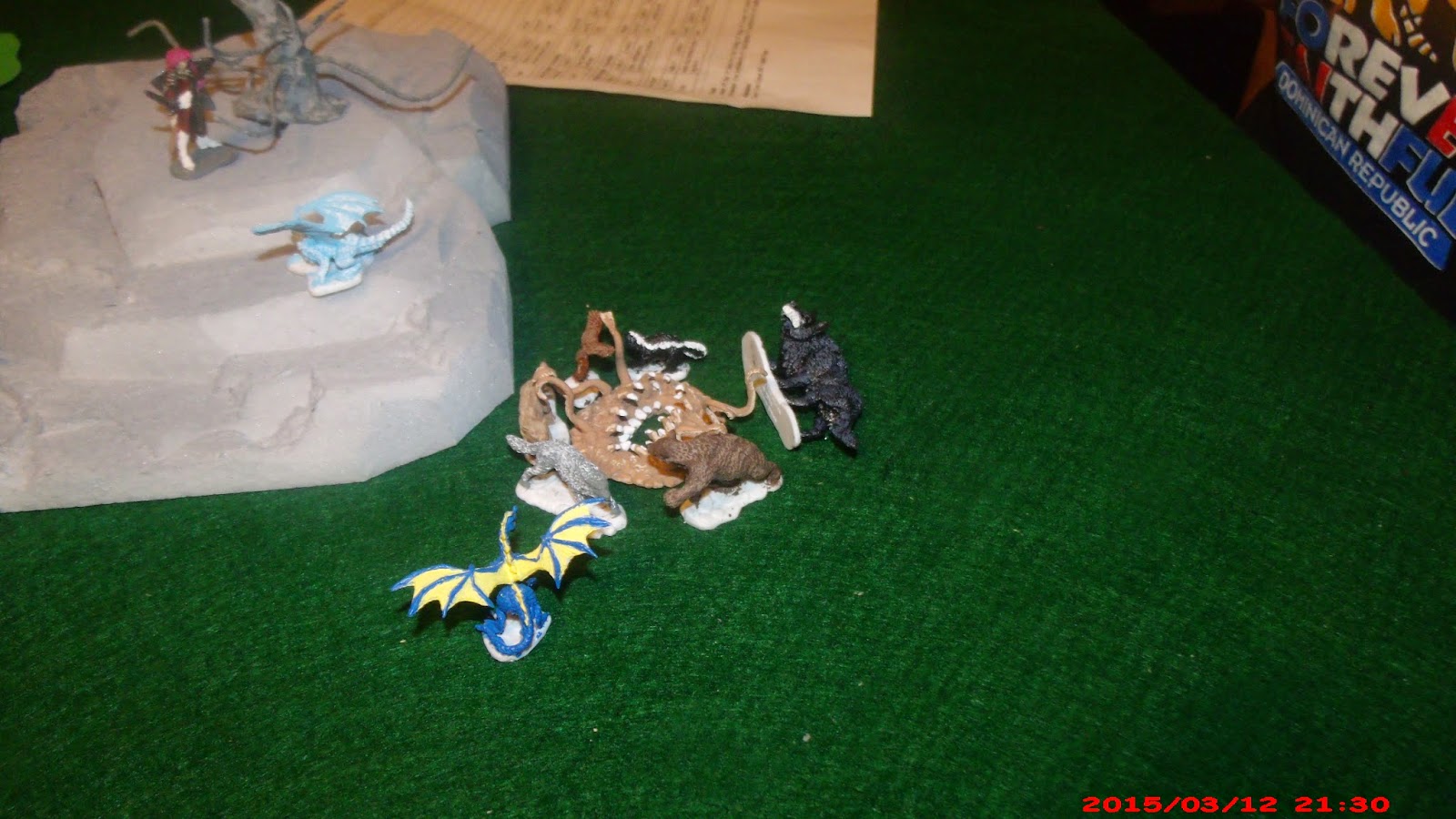 The Maw of Terror is surrounded by animals, a tactic that worked wonderfully against the Bulette.  The Roper un-Burrows on top of the hill to attack the Elf Knight Leader. 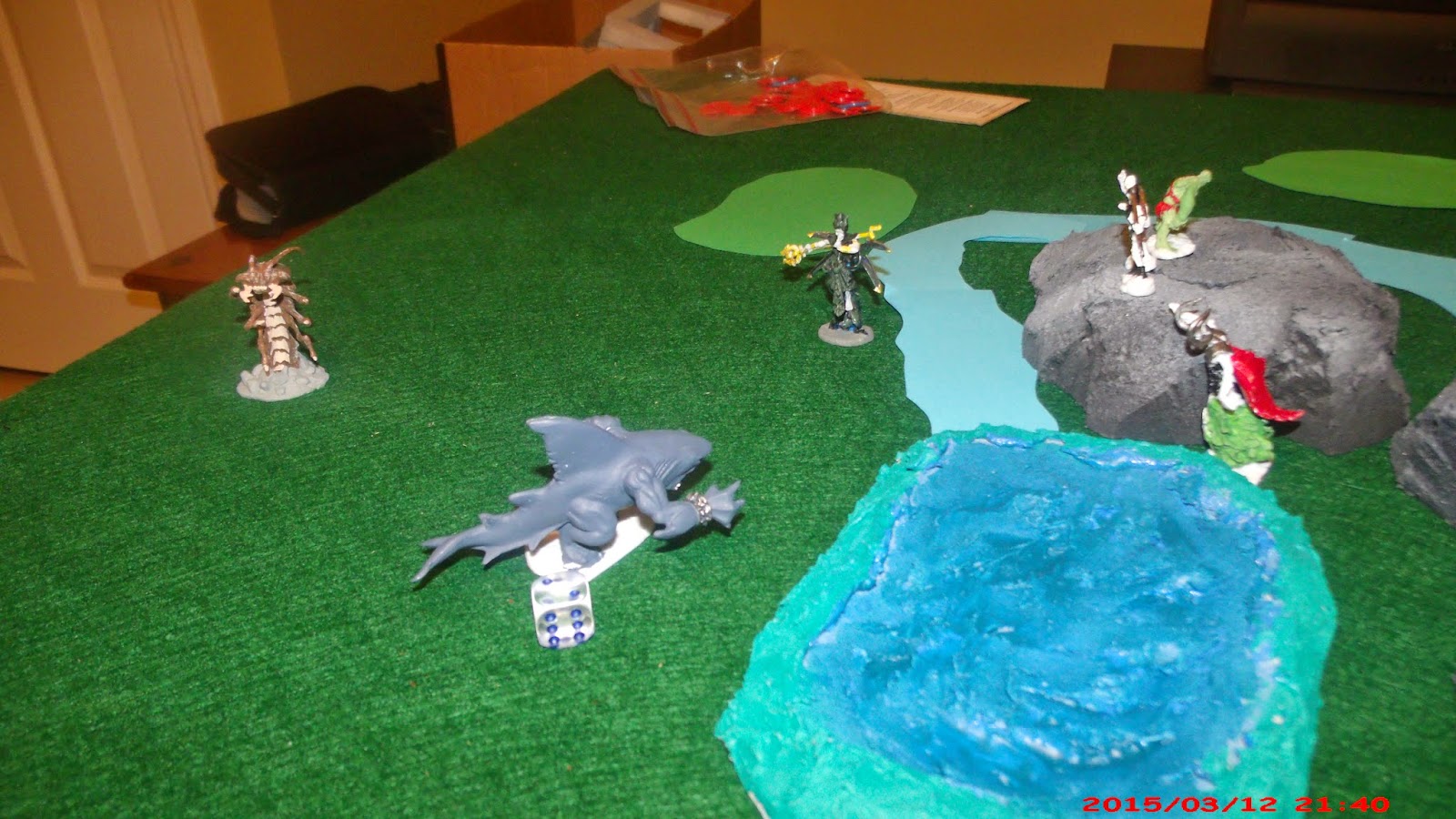 The Ankheg and Were-Shark dominate the undead side of the field. 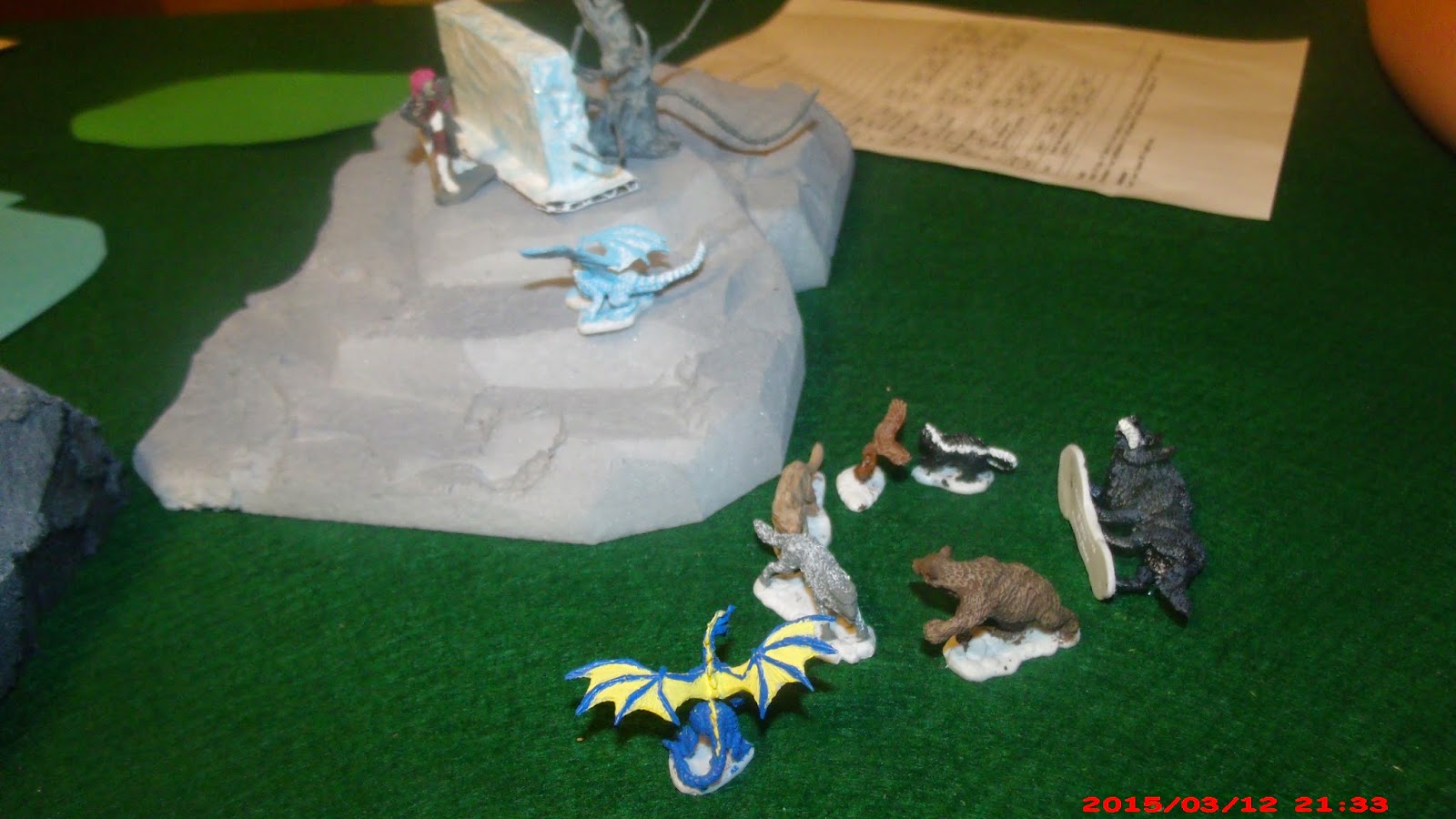 The White Dragon drops a Wall of Ice to protect the Elf Knight from the Roper, otherwise things might have changed for the worse.  We called an end to the game after the Maw of Terror is slain.

Overall things ran quite smoothly.  We got the rules for Heavy Armor and Block correctly this time, worked as designed.  My daughter used the Wall of Ice a few times, always to block a monster away from her animals so that she had time to gather them up to get an outnumbering modifier; great tactics.  First time using Burrow, its a nice thematic trait, just wish I could increase movement range beyond Short.

Lots of fun regardless.

Email ThisBlogThis!Share to TwitterShare to FacebookShare to Pinterest
Labels: Skirmish, Song of Blades and Heroes